The Dunwell Mine property is in the richest part of B.C’s Golden Triangle and located just 7km east of the Silbak Premier mine (being put back into production by Ascot) and 11km west of the Red Mountain deposit (Ascot - formally IDM).

Mineralization consists of lenses, disseminations and stringers of pyrite, galena, sphalerite and tetrahedrite with minor chalcopyrite, native silver and argentite in a gangue of quartz and minor calcite. Locally, the Dunwell vein contains up to 75 per cent sulphides. The mineralization is more intense where the veins are intersected by fractures of the West fault zone. High-grade mineralization is contained within one ore shoot in the Dunwell vein. This ore shoot strikes for 30 metres, extends downdip for 150 metres and averages at least 1.2 metres in width. A historic chip sample across 1.14 metres assayed 6.9 grams per tonne gold, 4456 grams per tonne silver, 6.6 per cent lead and 5 per cent zinc (gold equivalent of 2.2 oz/t) (Minister of Mines Annual Report 1933, page 58).

The Dunwell claims are contiguous with the past producing Portland Canal Mine. The Portland mine operated briefly between 1911 and 1912 producing 8,164 tonnes of ore averaging 2.33 g/t gold, 98.55 g/t silver and 1.56% lead. Drilling in 1973 defined a resource of similar tonnage of gold, silver, lead and zinc. BC government Minfile documents (Minfile 103P 064) reports that both mines lie within the Portland Canal Fissure Zone (a 6.5km long shear zone) which has hosted several historic mines that hosted high-grade lead/silver deposits. The much richer Dunwell Mine Property covers the northern half of the Portland Canal Fissure zone which is at a lower elevation (700m) and had greater historic production than the southern half.

Assays from initial samples taken from multiple locations on the Dunwell continue to show rich gold, silver, lead, zinc, and copper mineralization.   The image below has *14.8 g/t gold equivalent (AuEq); close to the historic mine average. The 30 samples taken averaged 19.16 AuEq using the values listed below.. 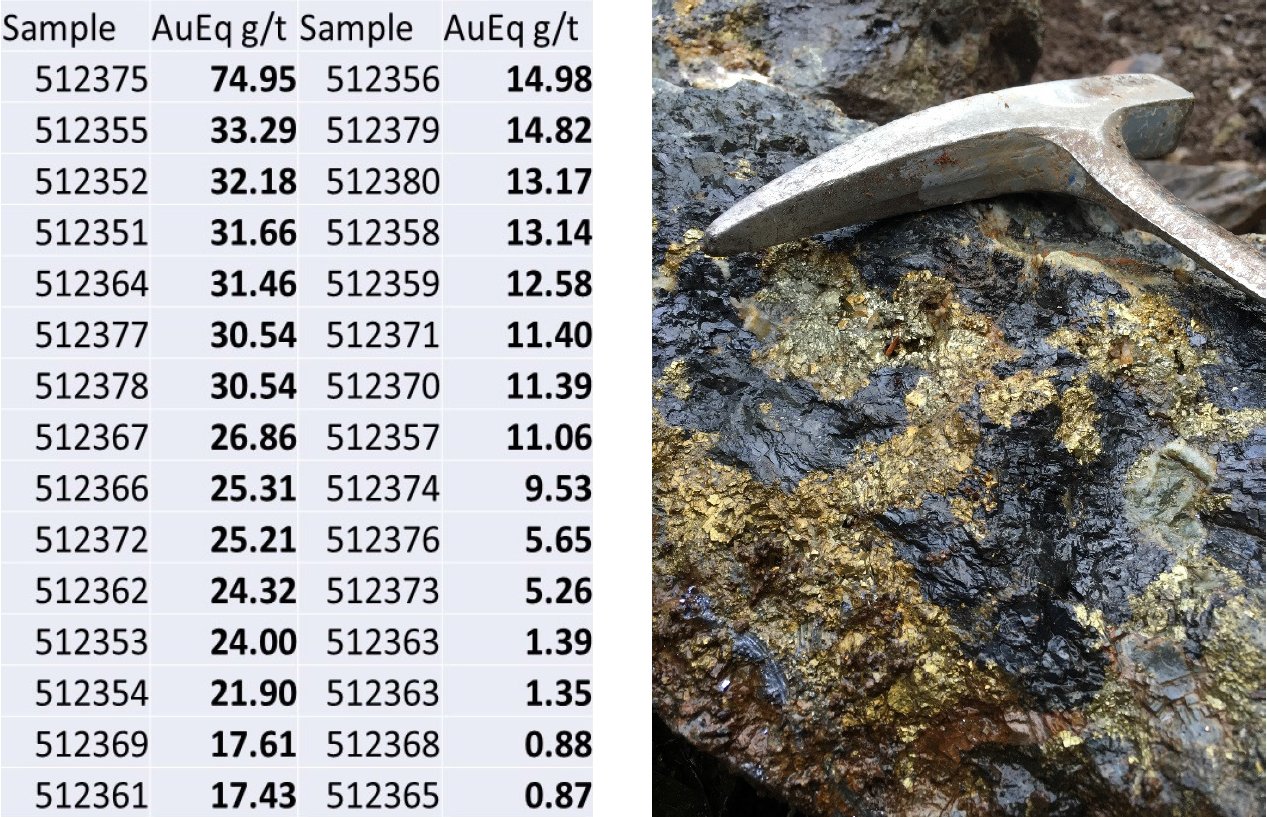