American Creek Resources Ltd. is pleased to provide an update to its shareholders.  We feel it beneficial to highlight the many positive things that have recently transpired in the market place and with our company.

There is a recent upswing in the exploration market for both base and precious metals.  Market interest is starting to mimic what we saw in 2006.  We recently attended one of the largest mining shows in the world (PDAC) where total attendance was a record-breaking 27,700, up by 26% or 5,700 from last year.  There was a palpable buzz at the conference which hasn’t been in the industry since before the market crash in 2008.  The junior exploration industry was one of the hardest hit in the world financial crash, but stands to have one of the biggest rebounds as well, as investors are starting to recognize the opportunity in front of them.

As we predicted, precious metal prices continue to rise .  On Monday, gold futures set an all-time high of $1,478 an ounce and silver hit a 31-year high over $40 an ounce.  Silver has been outperforming gold and will likely continue to do so until the ratio between gold and silver gets closer to their historic relationship of 15 to 1.

Investment in the exploration sector continues to rise.  The PDAC expects exploration in Canada to exceed $3.1 billion this year, with nearly $0.5 billion to be spent in British Columbia.

These market conditions are a stark contrast to those experienced over the last three years, and will undoubtedly be positive for our company.

One of the “hot spots” in the industry which is receiving attention from around the world is British Columbia’s “Golden Triangle”.  Interest is due to a combination of some of the largest gold / silver / copper deposits in the world moving towards feasibility combined with the February announcement that the North West Transmission Line was approved.  More exploration money will be spent in the Golden Triangle in 2011 than the rest of B.C combined.

Two of our flagship properties, Electrum and Treaty Creek, are located in the heart of this prolific mining district.  As evidenced by the attention we got at PDAC and in our recent over-subscribed financings, these properties are what the investment community is looking for. 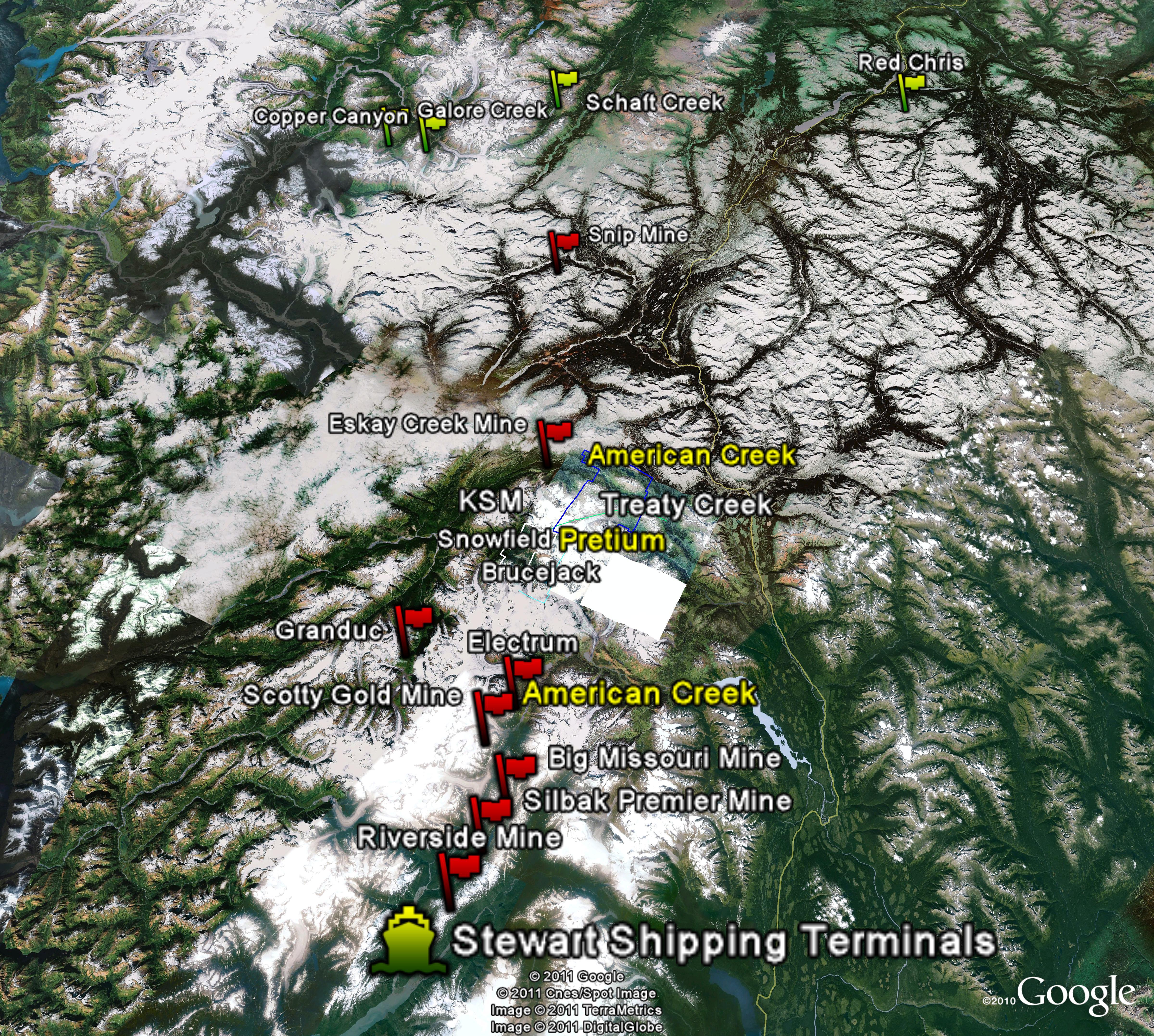 The areas from which some of these high-grade surface samples were discovered will be drill targets in 2011.

We will be generating exposure through a variety of means including a commercial that will be airing on national television (Business News Network: BNN) over the next few weeks. BNN is Canada’s only all-business and financial news channel and is received by over 5.5 million Canadian businesses / households.  Key viewership groups include professionals and executives in the banking, investment and insurance sectors, active, high net worth investors; and self-employed entrepreneurs interested in staying in touch with the business world.  The commercial will also be distributed to a database of over 150,000 pre-qualified investors.

You can watch this video by clicking on the icon below. 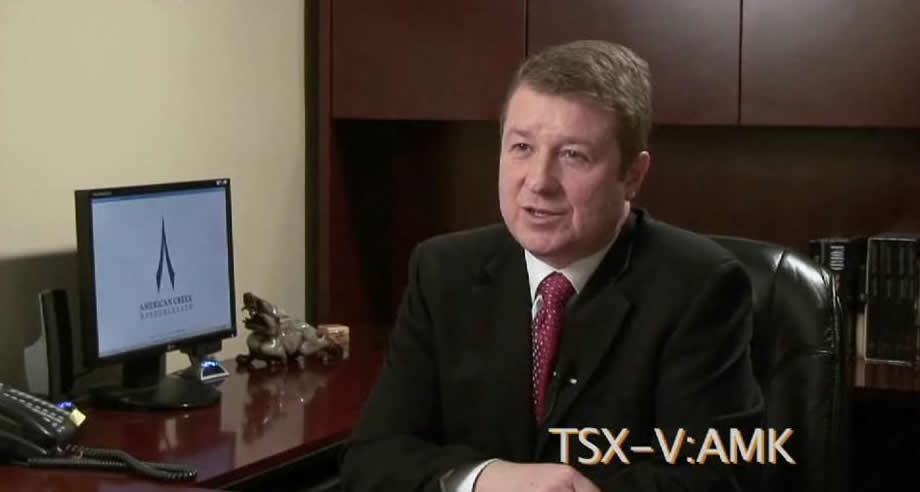 In addition to attending the PDAC in Toronto, we will be attending other investment conferences throughout North America.

We can also advise that in the next few weeks an independent research firm will be releasing an in-depth analytical report on American Creek.  This report will be distributed directly to over 400,000 institutional investors, analysts, financial advisors and high net worth investors.  It will also be distributed to Bloomberg, Reuters, First Call, Yahoo! Finance and to over 3,600 web sites.  A report summary will then be distributed by Reuters to over 600,000 professionals.

As part of our marketing initiative we have recently added several videos and other presentations relating to our properties.  You can also find interesting articles, AMK stock quotes, gold and silver quotes, technical geological information, press releases, etc. that will help you better understand the opportunity American Creek provides its shareholders.

American Creek continues to advance its law suit against Teuton Resource Corp. over title to the Treaty Creek property.  All pleadings have been filed, and we are in the process of exchanging documents.  The list of documents delivered by Teuton includes invoices we provided to Teuton in December, 2009.  The invoices provided to Teuton in December of 2009 indicate expenditures by American Creek of $6,210,399.69.  American Creek has incurred substantial expenditures in addition to this total.  The terms of our option agreement require that we spend $5 million.  We remain confident that we have earned a 51% interest in the Treaty Creek property and that Teuton is in breach of our option agreement.  We will continue to move the suit forward towards a speedy resolution.

You can find material documents relating to the law suit here.

The company’s 2011 Q1 financial statements will show that in the past few months we have eliminated over $1.5 million of debt.  We currently have cash reserves and pre-payments of over $700,000 towards this year’s exploration programs.  Canada Revenue Agency has recently confirmed that we will be receiving a mining exploration tax credit payment of approximately $690,000 for exploration conducted in 2007.  We anticipate further payments from CRA for work conducted since 2007.

We would like to congratulate Mike Muzylowski, one of our Directors, on being inducted into the Canadian Mining Hall of Fame in January of this year.  Prior to this latest honour, in 1988 Mike was awarded Prospector of the Year by the Prospectors and Developers Association of Canada.  We are also pleased that Don McKinnon, who was awarded the Order of Canada for his contributions to Canadian mining and who has also been named Prospector of the Year, continues to be on our Board of Advisors.  Mike, Don, and the other management, Directors and Advisors bring over 200 years of mining and exploration experience to the company, and collectively have been instrumental in bringing close to 20 mines into production.

Increased exposure in the bullish exploration stock market, along with the rich silver-gold history of the Electrum, gives American Creek’s management optimism in advancing its projects this year.  The company is in a position of strength given its properties, management, and financial position, and will continue to create tremendous potential for its shareholders in the immediate and long-term future.

For further information please contact Darren Blaney at:  Phone: 403 752-4040 or Email:  This email address is being protected from spambots. You need JavaScript enabled to view it..  Information relating to the Corporation is available on its website at www.americancreek.com.