AMERICAN CREEK REPORTS THAT TUDOR HAS DISCOVERED A NEW GOLD ZONE AT TREATY CREEK: 110 M OF 0.909 G/T GOLD, UPPER 316 M OF HOLE YET TO BE ASSAYED

The new gold zone was intersected in the third hole (CB-16-03) of the 2016 drilling program and is located approximately 870 meters northeast of the Copper Belle zone (drilled in 2007 and 2009).   The hole was drilled into a target identified by the magnetotelluric survey (MT survey) which was completed earlier in the 2016 field season.

Darren Blaney, American Creek CEO stated: “We are very pleased with what Tudor has accomplished in discovering this new gold zone. It is very significant in that this hole is located almost a kilometer from the 2009 Copper Belle discovery hole. The area of gold mineralization is clearly much, much larger than previous work has shown. This new discovery also confirms that the MT survey accurately identifies targets at Treaty Creek like it has for Seabridge and Pretivm on their respective KSM and Brucejack projects to the south in which the same MT survey technology was utilized.” 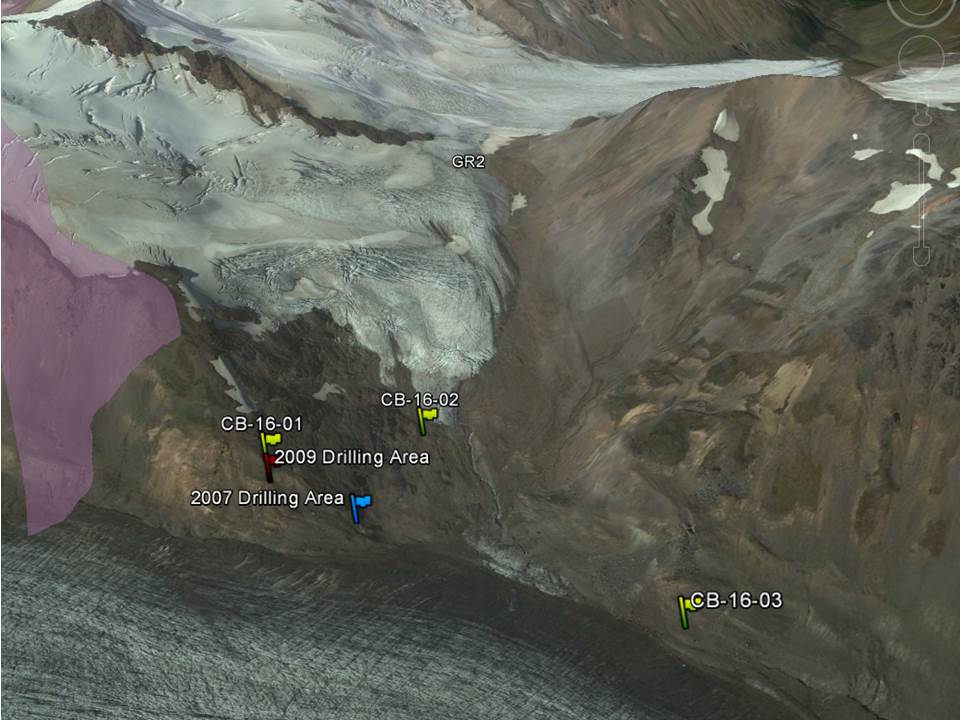 The Treaty Creek project is a joint venture with American Creek holding a 20% fully carried interest to production. Tudor is the operator and holds a 60% interest with Teuton Resources Corp. holding the remaining 20% carried interest.

James Hutter, P.Geo., is the Qualified Person as defined by National Instrument 43-101 for the 2016 Treaty Creek project and the results reported by Tudor.

American Creek is a Canadian mineral exploration company focused on the acquisition, exploration and development of gold and silver properties within the Province of British Columbia, Canada.

In addition to the Treaty Creek project, the Corporation holds interests in the following properties:

The Electrum property is also located in the “Golden Triangle” approximately 45 km north of Stewart between Pretivm’s Brucejack gold deposit located 25 km to the north and the past producing Premier gold mine 20 km to the south. The Electrum shares similar geology to both the Brucejack and the Premier. The project is a JV between operator Tudor (60%) and American Creek (40%).

Tudor recently concluded a diamond drilling and blast trenching program. Initial trenching results reported by Tudor on Sept 12, 2016 included silver grades up to 30,200 g/t within the New Blast vein system. Further results from the drilling and trenching are expected this fall.

American Creek holds a 100% interest in the Gold Hill property located east of Fort Steele, BC in the Boulder Creek watershed. The Wildhorse River, to which Boulder Creek is a headwater tributary, is the site of one of Canada’s biggest historic gold rushes with approximately 42 tonnes of placer gold reportedly being recovered from the Wildhorse below the confluence of Boulder Creek.

A field mapping and geochemical sampling program is currently being conducted on the property. Work also included a magnetic survey that was recently completed in the area known as the Big Chief where several historic adits were driven into high grade gold veins.

American Creek holds a 100% interest in the Austruck-Bonanza property located approximately 50 km north of Kamloops. The property is immediately adjacent to WestKam Gold Corp.’s Bonaparte Project and is within 100 meters of the Bonaparte pit where in 1994, a 3,425 ton bulk sample averaging 26 g/t gold was taken. In July of 2016, WestKam reportedly began a 10,000 tonne bulk sample program to further test other near-surface high grade gold veins.

A field program consisting of geochemical sampling, mapping and magnetic surveying is currently underway on the property.