Successful program on Seabridge’s Iron cap has significant implications for both the KSM and Treaty Creek.

Seabridge Gold has completed its 2017 drilling on the Iron Cap deposit which has the highest grades of the KSM and could be as big as the Mitchell deposit (the world’s largest undeveloped gold deposit by reserves) with higher grades.

The Iron Cap could be a game changer for Seabridge in its quest to put the KSM into production. Rudy Fronk, president and CEO of Seabridge Gold, stated the following concerning the completion of program:

“The success of this year's drilling indicates that Iron Cap is approaching parity in size with these other deposits (KSM) but with zones of considerably higher metal values. We now see the early development of Iron Cap as a high priority for further study due to its grade, location and size. Revising the project's mine plan to reflect this thinking would likely have a positive impact on KSM's projected economics."

Seabridge’s “unqualified success” on Iron Cap confirms, yet again, the geological / geophysical markers found over and over within the large hydrothermal system shared by the KSM, Brucejack, VOK, and Treaty Creek deposits. American Creek Reources has a 20% carried interest in Treaty Creek.  The Kyba / Nelson report (which covered the KSM and Treaty Creek) stated that the three critical factors for "B.C.'s next big deposit" are:

This is the case for the numerous KSM deposits and deposits on the ajoining Treaty Creek property.  In addition to this geological prediction, a geophysical survey called a Magnetotelluric Survey has been succesful in discovering and developing many KSM / Snowfiled / Brucejack / VOK deposits.  It is now being used on Treaty Creek with great success.

Like many other KSM discoveries, the Iron Cap / Lower Iron Cap zones:

This geological pattern also takes place on the adjacent Treaty Creek property where:

In 2017 Tudor Gold drilled 5,401m on the high-grade HC/GR2 zone and another 13,722m (+ an existing 9,248m) on the Copper Belle zone.  All Copper Belle holes (first 4 of 27) have intersected long intervals of mineralization to depth with a similar grade to the historic average of 0.7 g/t gold.  These include:

Tudor Gold stated:  "The drill program was designed for approximately 50 meter step-outs across the mineralized zone to create a block of delineated mineralization for a preliminary resource estimate........These drill holes cover an area of approximately 250 meters wide by a kilometer long.  Copper Belle zone mineralization is open in all directions and to depth."

The HC zone, located adjacent to the high-grade GR2 zone, has intersected intervals with similar grade to the GR2 zone in the first 6 of 17 holes including:

Tudor Gold Stated:  The HC drill program tested the mineralized strata-bound structure for a strike length of 400 meters and 400 meters down dip (still open at depth), and the vein system remains open to the north, south and at depth.  The program was designed with a maximum of 50 meter step-outs in the mineralized zone to prepare for a preliminary resource estimate in this area.

Below is an image showing the Kyba Discovery Line and the Sulphurets Fault which continues north through Seabridge’s deposits onto to the Treaty Creek property. 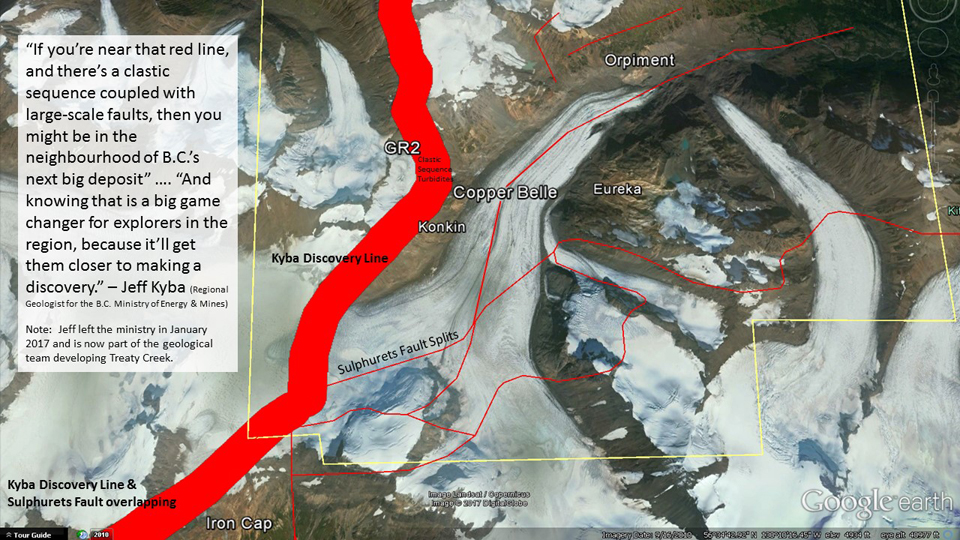 In summary, the significant points of the Seabridge news release and the implications of it are:

Initial results from Treaty Creek are also confirming the Kyba / Nelson report to be correct and show there is potential to have significant resource calculations on the Copper Belle zone and the high-grade HC/GR2 zone.

The full geological report can be found here.  Not recommended if you're not a geoloist.  The Northern Miner article summarizes it for non-geologists.