Cardston, Alberta--(Newsfile Corp. - August 20, 2020) - American Creek Resources Ltd. (TSXV: AMK) ("the Corporation") is pleased to report that it has commenced a high-resolution magnetic survey in combination with a LIDAR survey at the company's 100% owned Dunwell Mine gold and silver property located in the Golden Triangle of British Columbia.

Genesis Aviation Inc. is currently completing a High- Resolution Gradient Magnetometer survey in conjunction with a Three-Dimensional LIDAR survey over the property. This type of magnetic survey is flown by a low altitude helicopter and offers Measured Horizontal and Vertical Gradient data. This makes a significant difference to the magnetic inversion that provides a model at depth. The LIDAR survey being collected over the whole property will allow the past, present and future geological and geophysical programs to be correlated with a much higher degree of accuracy than otherwise possible.

The Dunwell Mine is a high-grade past producing polymetallic mine located just 8 kilometers by road from the shipping town of Stewart BC. The mine itself is one of dozens of high-grade gold / silver / lead / zinc occurrences that are primarily associated with the Portland Canal Fissure zone that extends for several kilometers through the property. The Dunwell Mine project boasts exceptional logistics and a rich mining history with potential for future development. It is located within the Bear River valley which was one of the first areas prospected in the Stewart camp because of its combination of rich veins and easy access due to the low elevation and proximity to town. 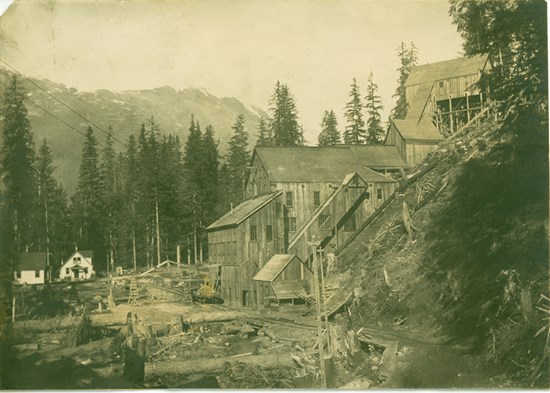 Figure 1: Image of the historic Dunwell Mine which shut down during World War II

Because of the property's low elevation and heavy rainfall, it is completely covered with a heavy canopy of vegetation with limited exposed bedrock in gullies and stream beds. As no modern exploration techniques or technologies had been conducted on the Dunwell prior to American Creek's acquisition, careful consideration was given as to the best options that could lead to discovery. This resulted in a decision to proceed with a detailed Magnetic survey in 2020 and an Induced Polarization (IP) survey in the fall of 2019.

Alpha IP was chosen over a conventional IP survey because of its cutting-edge technology in detecting detailed high chargeability / low resistance anomalies in the ground. Specifically, the Alpha IP survey has far greater resolution and depth than standard IP's and can provide the data in a 3D view. These are critical factors as the Dunwell Mine property contains numerous high-grade veins that are more readily detected using a high-resolution survey. Simcoe Geoscience, who performed the survey, was chosen because of their exceptional experience in this field and the in-depth interpretation they provide. They will also be using their expertise to integrate the new 3D Magnetic Survey results with the existing IP results. Simcoe's same Alpha IP system continues to achieve success locating high-grade veins at Ascot's neighboring Silbak-Premier Mine (9km away).

The exploration objectives of the Alpha IP survey were to detect the source of potential high‐grade Au, Ag, Pb, Zn, Cu in quartz and detect quartz breccia veins hosted in thin bedded argillite, siltstone and greywacke of the Middle Jurassic Salmon River Formation (Hazelton Group). The Alpha IP system was used to provide the following benefits:

Thirty-seven anomalous zones were interpreted as significant targets for follow up from surface to ~300m+ depth. Out of thirty-seven anomalous zones, fifteen are considered first priority, sixteen second and six are third priority targets. The anomalous zones consist of strong to moderate chargeability related to associated conductive to resistive zones. These targets have a strong correlation with the Portland Canal Fissure Zone with the strongest targets running along the Dunwell Creek / Portland Canal Fault, the secondary targets running down each side of the primary target, and the tertiary targets running along the western edge of the fissure zone.

CEO and President, Darren Blaney stated: "We are excited about the magnetic and Lidar surveys taking place right now and the further detail they will give us in expanding our understanding of the underground geology when combined with last fall's Alpha IP.

"We have always thought that the numerous high-grade gold and silver showings associated with the Portland Canal Fissure Zone, that extends for several kilometers down the valley, are related in some meaningful way and may be part of the same geological event. The additional geophysics will greatly add to our understanding of the geology down to 400 meters in depth.

"We are expecting quick turnaround of the new geophysics data which will allow us to commence the Phase II drill program this fall with the advantage and added benefit of utilizing this new information in targeting the drill."

The property is located just 7 km east of the Silbak Premier Mine (Ascot Resources), 11 km west of the Red Mountain deposit (Ascot - formally IDM), and only 9 km north of the past producing Porter Idaho silver mine (Strikepoint Gold). Through a series of strategic acquisitions American Creek was able to purchase the past-producing Dunwell Mine as well as several adjoining very prospective properties, combining them into one large land package that encompasses the most promising gold and silver mineral occurrences and historic workings within the Bear River valley. The amalgamated property spans 2,222 hectares covering the majority of the Portland Canal Fissure Zone, an area first prospected in the late 1800's and hosting some of the earliest producing gold and silver mines in the Stewart area. 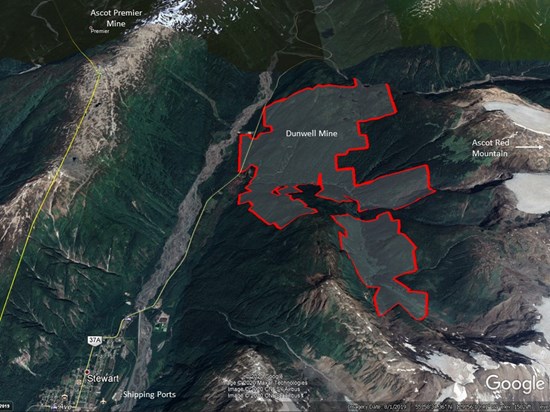 Figure 2: Image of the Dunwell Mine Property located between Ascot's Premier Mine and Red Mountain

The Portland Canal Fissure Zone is the most significant geological feature in the Bear River valley. This zone of faulting and shearing trends north, dips steeply west and hosts a vein system that extends southward for 6.5 kilometres from the Victoria/Dandy occurrence (on Dunwell) in the north, through the Dunwell mine itself, across Glacier Creek to the Ben Bolt occurrence (on Dunwell) in the south. With the recent acquisition of the Glacier Creek Crown Grants (south of Glacier Creek) American Creek now controls 5km of the 6.5km fissure zone which contains numerous high-grade polymetallic mineral occurrences including two past producing mines (Dunwell and Portland Canal).

The Dunwell project is located 8km northeast of Stewart and is road accessible with the Dunwell Mine adit itself located only 2km from Highway 37A and a major power line (both running through the property). Stewart hosts two deep sea ports including ore loading and shipping facilities. Unlike the majority of mineral properties located near Stewart, the Dunwell Mine is located in low mountainous terrain (800 m and lower elevation) with relatively moderate relief. These features allow for potential year-round work which typically isn't the case for exploration programs conducted in the Stewart region where projects are typically at higher altitude, are accessible only by helicopter, and lack critical infrastructure such as roads and power. The Dunwell Mine project may very well have the best logistics of any project within the Golden Triangle. 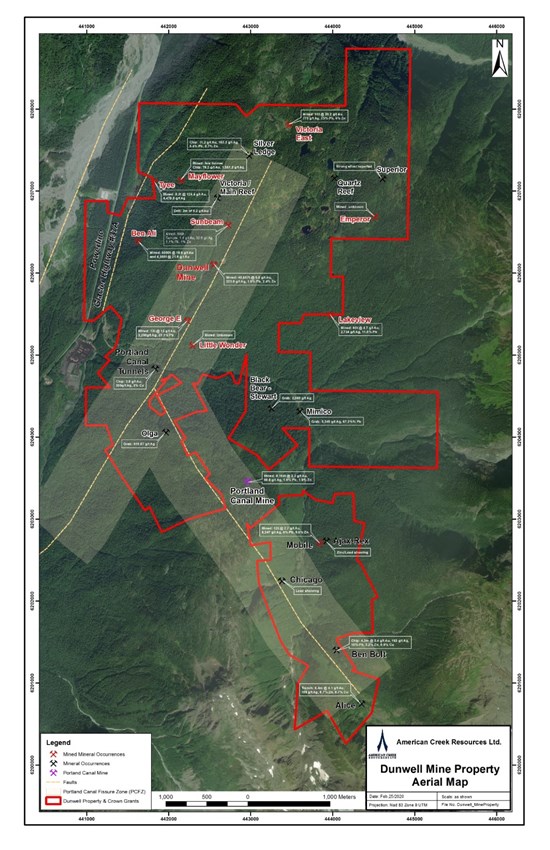 Figure 3: Image of the Dunwell Mine boundary and showings

In addition to the Dunwell mine itself, the property package also contains over two dozen other high-grade gold and silver occurrences and historic small-scale gold/silver high-grading operations along a north/south trend that correlates to the fissure zone and major faulting. Some examples of the nine areas that actually produced ore are:

Each of these areas were producing during the 1930's when exploration techniques and technology was very primitive.

The High- Resolution Gradient Magnetometer survey combined with the 3D Alpha IP survey represent the cutting edge in geophysical technology today and are designed to aid with understanding potential correlations between the multiple high-grade surface showings.

The Dunwell Phase II drill program is expected to commence early this fall once the data and interpretation from the geophysics survey is available.

For more information on the Dunwell Mine please click here:
https://americancreek.com/index.php/projects/dunwell-mine

The Qualified Person for this news release for the purposes of National Instrument 43-101 is Jim McRae, P.Geo. He has read and approved the scientific and technical information that forms the basis for the disclosure contained in this news release.

Other properties held throughout BC include the Gold Hill, Austruck-Bonanza, Ample Goldmax, Silver Side, and Glitter King.

Certain statements contained in this press release constitute forward-looking information. These statements relate to future events or future performance. The use of any of the words "could", "intend", "expect", "believe", "will", "projected", "estimated" and similar expressions and statements relating to matters that are not historical facts are intended to identify forward-looking information and are based on the Corporation's current belief or assumptions as to the outcome and timing of such future events. Actual future results may differ materially.

The Corporation expressly disclaims any intention or obligation to update or revise any forward-looking statements whether as a result of new information, future events or otherwise except as otherwise required by applicable securities legislation.

To view the source version of this press release, please visit https://www.newsfilecorp.com/release/62173