Cardston, Alberta--(Newsfile Corp. - January 11, 2022) - American Creek Resources Ltd. (TSXV: AMK) ("the Corporation") is pleased to present the final drill results from the 30,108 meter, 2021 resource expansion and definition drilling program for the Goldstorm Deposit and Calm Before the Storm Zone (CBS), as well as surface sampling results from the Eureka Zone, at their flagship property, Treaty Creek (the "Project"), located within the Golden Triangle of Northwest British Columbia.

Included in this press release are the results of three diamond drill holes that were completed at the Goldstorm Deposit along sections 113+00 NE and 118+00 NE, 500 metres apart, as well as the third exploration diamond drill hole at the recently discovered Calm Before the Storm Zone. Results of a continuous surface channel sample line completed at the Eureka Zone are also included.

Drilling and Surface Sampling Highlights include:

CALM BEFORE THE STORM

Tudor Gold's President and CEO, Ken Konkin, P.Geo., states: "We are pleased to have completed the 2021 exploration season on a very positive note, having demonstrated that the Goldstorm Deposit still remains open in all directions and at depth. We have significantly expanded the Goldstorm system to the northwest, north, northeast and southeast, in addition to reporting some of our longest and strongest gold-copper mineralized intercepts that surpassed even the results obtained from last years' extremely successful drill program. Our primary goal is to define the ultimate limits of gold-copper-silver mineralization of the Goldstorm Deposit so we can determine the final resource estimate. We are committed to increasing our efforts for 2022 to achieve this goal.

Exploration in other areas of the Property demonstrated that the Eureka System continues 300 meters to the north from our well-mineralized exploration drill hole EK-21-01 (Press Release September 28th, 2021) that confirmed the near-surface presence of a large gold target. Other notable achievements of 2021 were the successful expansion of the Perfect Storm System, located two kilometres southwest of Goldstorm, and the discovery of the Calm Before the Storm (CBS) system located two kilometres northeast of the Goldstorm Deposit. The Treaty Creek project has now ballooned with the addition of these three new drill targets that will be explored in tandem with definition drilling of the Goldstorm deposit limits in 2022. Our geological team is currently focusing their efforts over the next few weeks to complete the plans for the proposed 2022 diamond drill program. Leading the geological team is our new Vice President of Resource Development, Ms. Natalie Senger (P.Geo.). It's very rewarding for me to see the professional development and advancement of such a deserving geoscientist, who I have had the pleasure of working with during my career."

The complete list of the above reported composited drilling results for Goldstorm and CBS, as well as the drill hole data, including hole location, elevation, depth, dip and azimuth, are provided in Table 1 and Table 2, respectively. Rock channel sample results from Eureka trenching are shown in Table 3. Please click on the following link to view: Plan Map and Cross Sections for the drilling and surface samples reported in this news release.

Darren Blaney, CEO of American Creek, commented: "It has been an amazing year of discovery at Treaty Creek. Even through some of these last holes stopped short due to conditions, they are showing an extension of mineralization at Goldstorm and will be re-drilled next year. The fact some holes weren't completed due to poor field conditions demonstrates our partner Tudor Gold's resolve to maximise the drilling season beyond the norm and advance the project as quickly as possible. We would like to acknowledge Walter Storm, Ken Konkin, Sean Pownall, and the rest of the team at Tudor Gold for the exceptional work they have done at Treaty Creek.

Tudor has not only expanded the dimensions of the Goldstorm, but has commenced preliminary work on the Perfect Storm and Eureka zones along with discovering a new zone called The Calm Before the Storm. The Goldstorm deposit remains open in all directions and appears to be getting richer and deeper as it extends to the north giving us lots to look forward to in 2022." 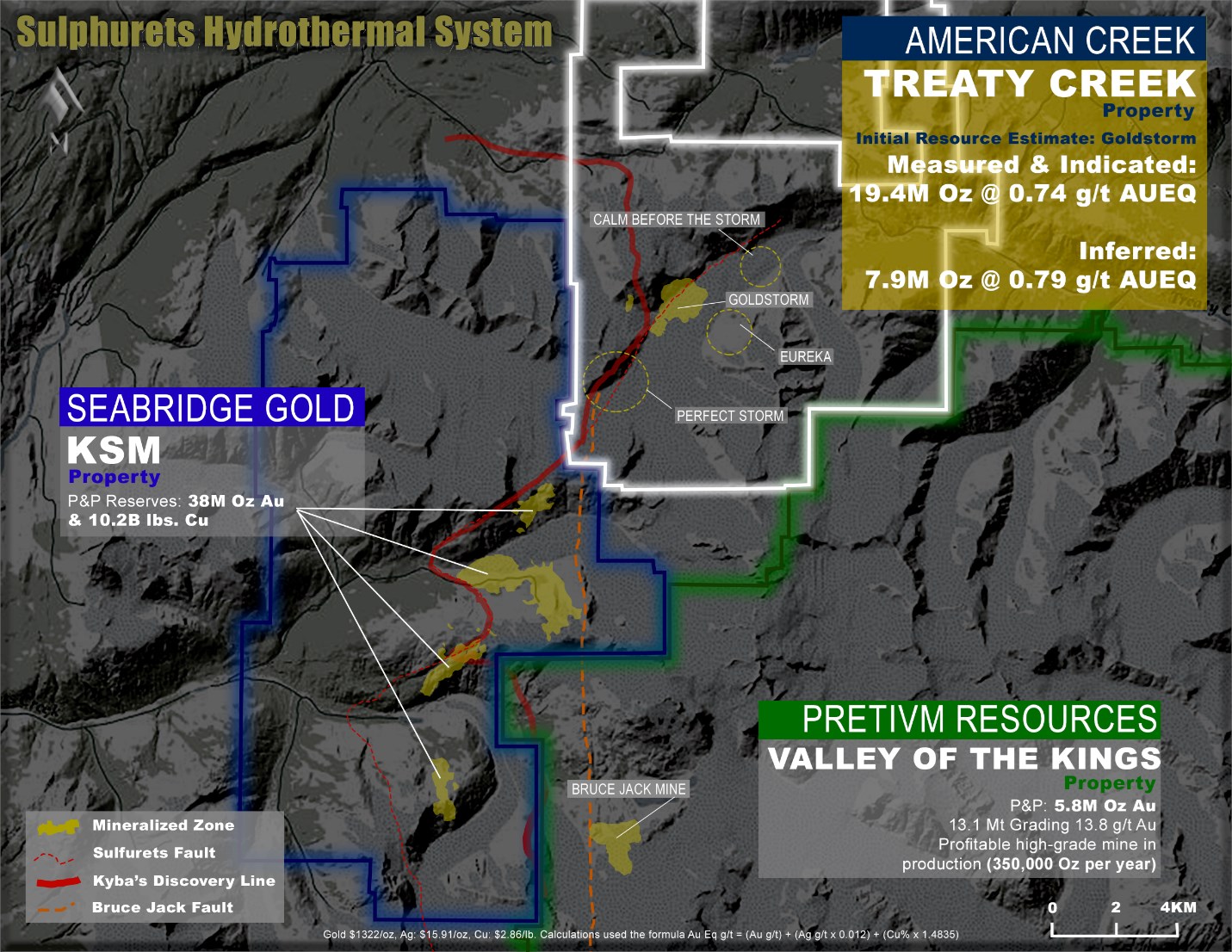 The Qualified Person for Tudor's news release for the purposes of National Instrument 43-101 is Tudor's President and CEO, Ken Konkin, P.Geo. He has read and approved the scientific and technical information that forms the basis for their disclosure contained in their news release.

The Qualified Person for this news release is James A. McCrea, P. Geo., for the purposes of National Instrument 43-101. While American Creek has not independently confirmed Tudor's information, Mr. McCrea has read and approved the scientific and technical information that forms the basis for the disclosure contained in this news release.

To view the source version of this press release, please visit https://www.newsfilecorp.com/release/109682