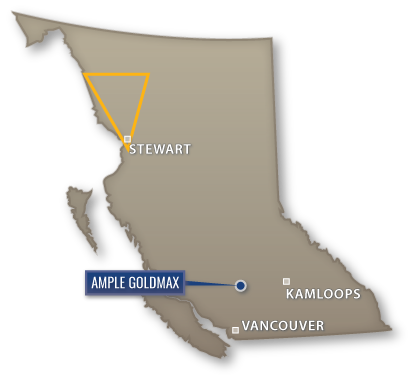 Jim McCrea P.Geo has reviewed and approves the information for the Ample gold Max Property.

The Ample Gold Max property is a high grade and native gold with copper-silver property located 8 kms west of Lillooet, BC along and adjacent to Highway 99 South along Cayoosh Creek. This area has a long but intermittent history of gold prospecting which dates back to 1866 when the Chinese discovered placer gold along its lower reaches. These placers yielded a large amount of course free gold for which statistics cannot be found. It was generally conceded that the total amount went into the hundreds of thousands of dollars, even in the early years. Prospecting was carried out upstream to locate the source of this gold which lead to two hard rock mines. In 1887 the first lode gold in bedrock was found above these placers. In 1897 the Golden Cache mine started production only to fail the following year. Some limited production was achieved in 1901. Prospecting for gold continued along the steep Cayoosh Creek canyon which lead to the opening of the Ample mine.

(The ore for the mill was free milling gold in quartz)

The Ample Gold Max property has an established trend of mineralized zones along the Cayoosh Creek Fault for more than 3 kms. Many of the mineralized zones like the Ample–Goldmax and Bonanza Ridge zones display visible free gold and abundant sulphide lenses, along a strike length of showings over 1km in length. The old timers only mined the free gold and ignored the sulphide ore because of lack of processing facilities for this type of ore.

Supreme Resources drill hole AG-08-38, which was a "twin" to Homestake's hole AG 96-07 intersected 6.05m of strongly quartz-veined greenstone and graphite phyllite from 30.12m to 36.17m, accompanied by arsenopyrite, pyrite, and pyrrhotite. Visible gold was observed at two locations within the AG-08-38 drill core.
The Bonanza Gold Max property has returned gold values of up to 66.34 grams /tonne (2.13 ounces gold /tonne).
Some previous drilling results by Homestake and Gold Ore are in the following table:

The Ruby zone yielded 8 g/t Au over 3 metres. Gold has been located in four other zones called the Wedge, Red Ledge, C-Zone and Fillion zones. These zones have had very little, to no modern exploration.

Gold-bearing quartz veins are reported throughout this area, from Lillooet to Bralorne, perhaps the most famous of the past producers. The Bralorne - Pioneer Mine produced 4.1 million ounces of gold from 8 million tons of quartz vein ore between 1897 and 1971 (Christopher 2002).

Near Bralorne, the Minto deposit was hosted by quartz-carbonate veins with many sulphides, as well as gold. The Wayside property was also a former producer with massive quartz veins carrying various sulphides and free gold. 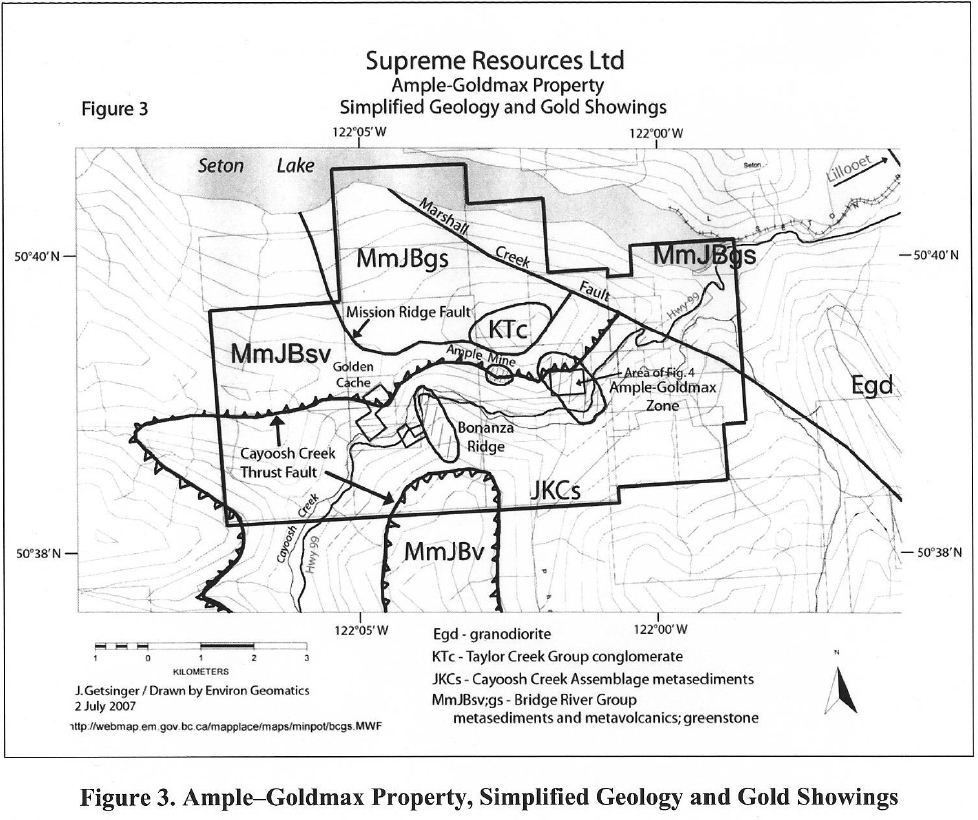 The Ample– Goldmax zone is at least 200 m wide and 200 m down dip and open to the west and northeast.

Logistics are great with power and rail only 8km away at Lillooet. New logging roads on the property provides good access to high potential areas of the claims. 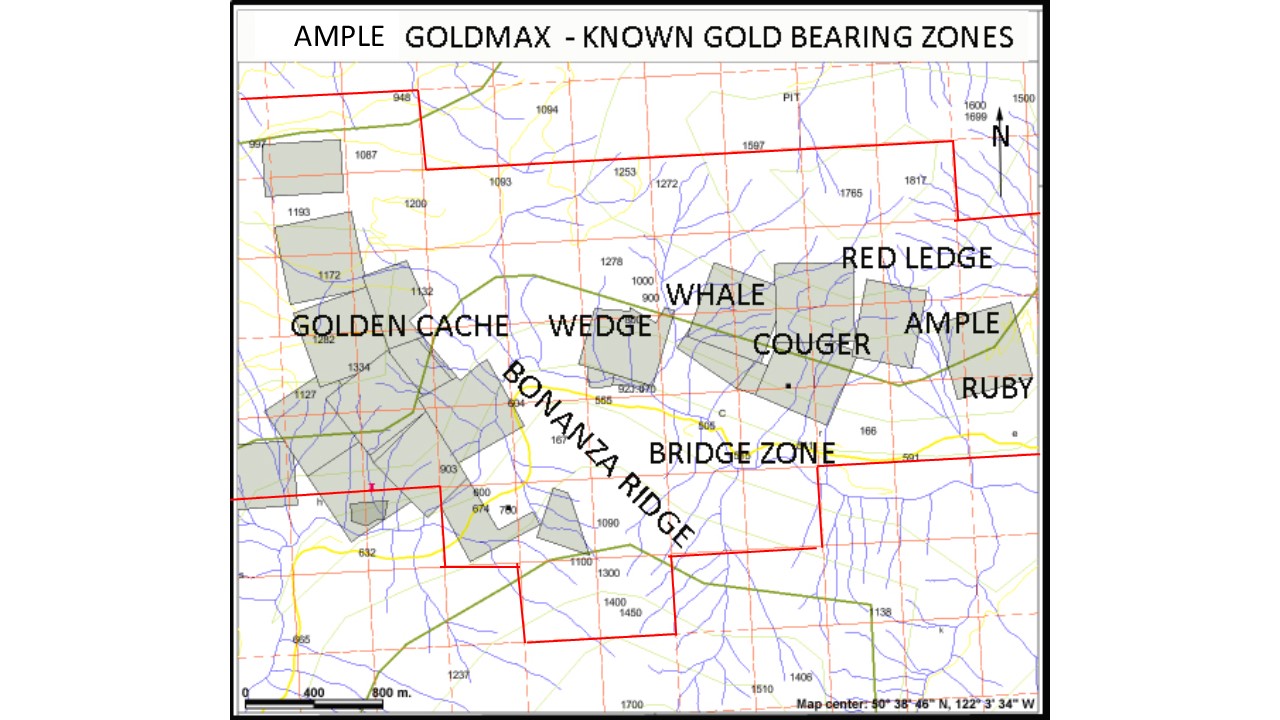 The Bonanza Ridge vein and structure has been traced for over 1.5Km along strike. Numerous other veins in the area have seen little to no exploration to date.
Portals to the old workings occur below and above Highway 99 and are accessible via an old foot trail.

Historical mine workings, consisting of a few old adits and drifts, are located at the Ample Mine (eight underground workings were mapped by Homestake) and Bonanza Ridge areas of the property, as well as on the Golden Cache. 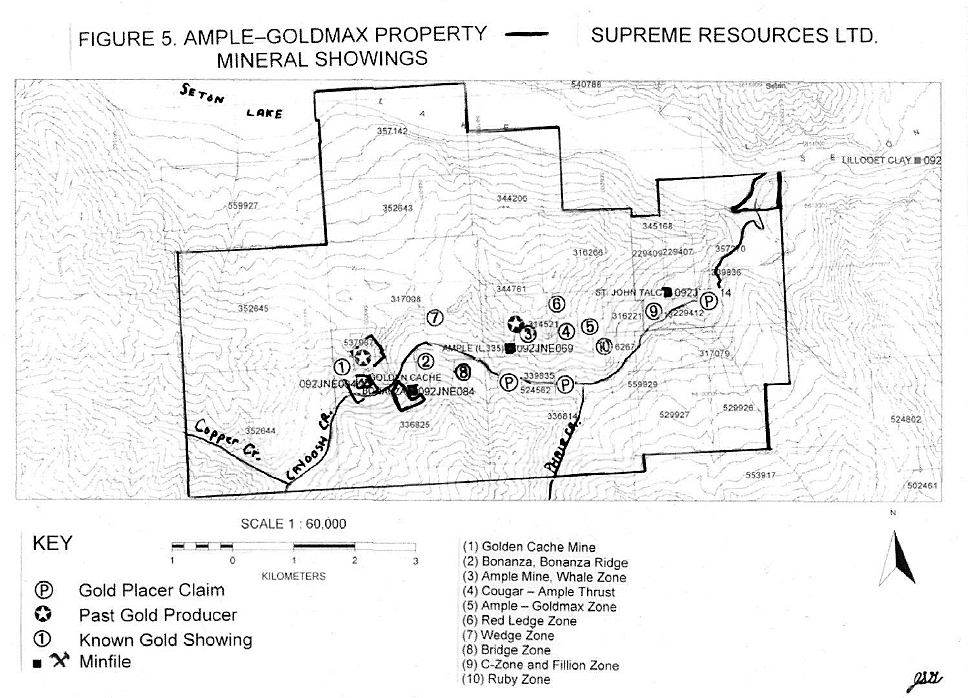 The Ample Mine
At the Ample Mine, located in the Ample claim about 750 metres west of the Ample/Goldmax Zone, gold mineralization occurs in quartz veins up to 40 metres long and 3 metres wide hosted generally within diorite at the footwall to the Cayoosh Creek Fault and its splays (Figure 4, Map 1). The mineralization strikes easterly and dips shallowly to the north (Kuran and McLeod, 1997a). Eight production and exploration drifts totaling about 300 metres have been driven on the lower of two mineralized zones.

Most mineralized zones are associated with the Cayoosh Creek thrust fault, which has emplaced greenstone and chert of the Bridge River complex over phyllitic metasedimentary rocks of the Cayoosh Assemblage, causing subsidiary structures and dilatant quartz veins mainly in the footwall.

Extending for 3km along this fault from the Golden Cache to the Ample-Goldmax Zone are several known areas of mineralization including the Wedge Zone, Whale, Ample Mine, Cougar (also known as the Cougar-Ample Thrust), Red Ledge, and Ample-Goldmax A, B, and C (and extensions including the C-Zone and Fillion Zone, and the Ruby Zone, as named by Kuran and McLeod 1997)

Low grade gold-bearing quartz stockwork and disseminated arsenopyrite occurs over zones of two to five metres wide in the incompetent phyllitic Cayoosh Assemblage rocks adjacent to the fault. Kuran and McLeod (1997a and b) state that mineralization along the Cayoosh Creek Fault can be traced from the Ample/Goldmax Zone westward through the Ample Mine and Wedge showings to the Golden Cache, a strike length of 3 kilometres Long, thick, high-grade gold-bearing quartz veins occur within diorite intrusions in the area of the Ample Mine and to a lesser extent in the Ample/Goldmax Zone. 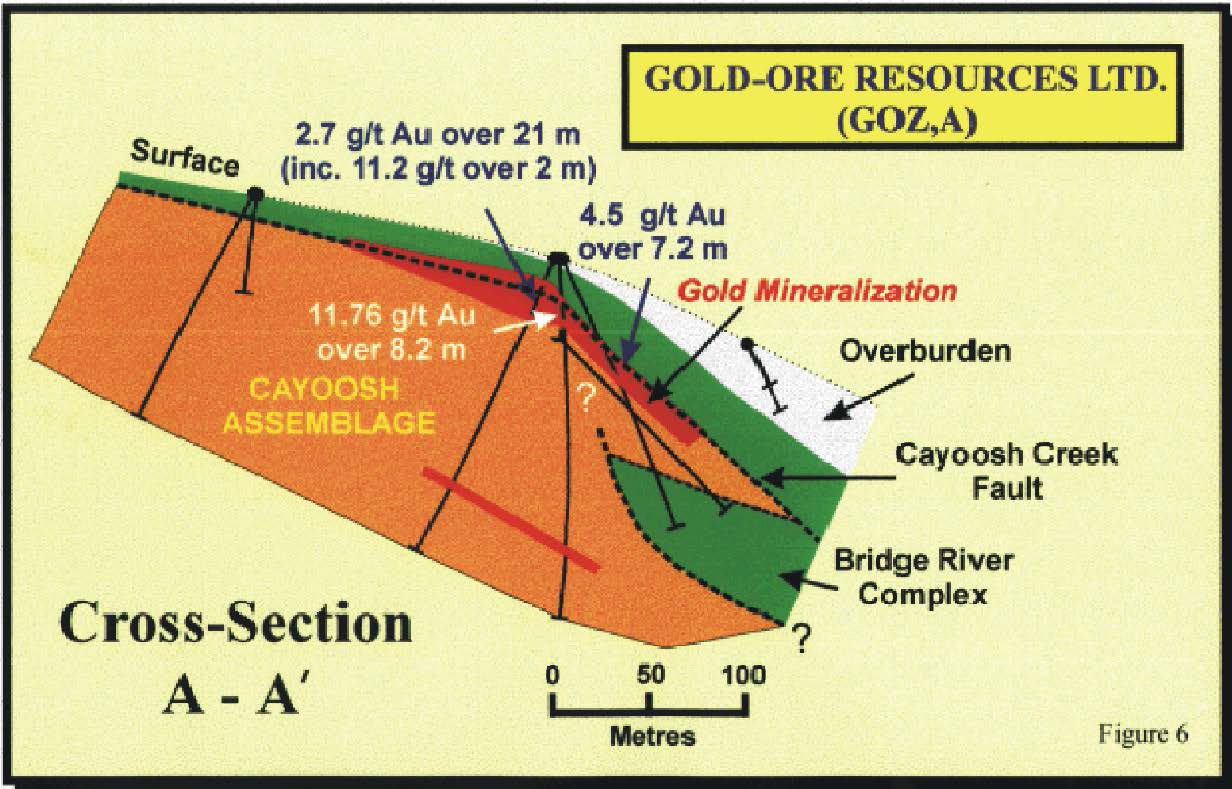 These gold showings are located mainly along a 3 to 4km extent of the Cayoosh Creek Fault and the area below it in Cayoosh Assemblage rocks.

All areas previously worked on are open to potential expansion and new discovery.

The Ample Goldmax claim area demonstrates an excellent exploration target in the search for an economic deposit of Gold with associated Silver and Copper.