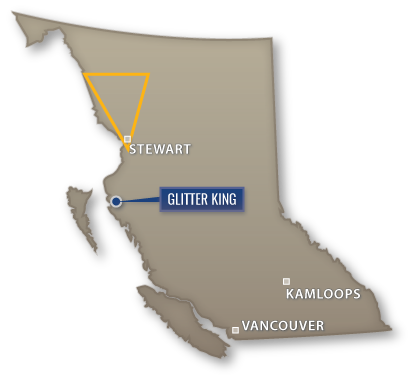 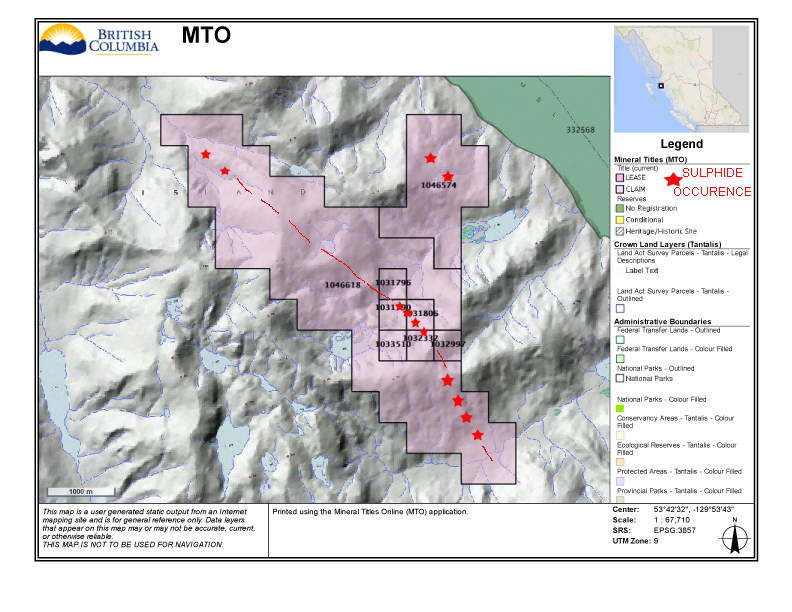 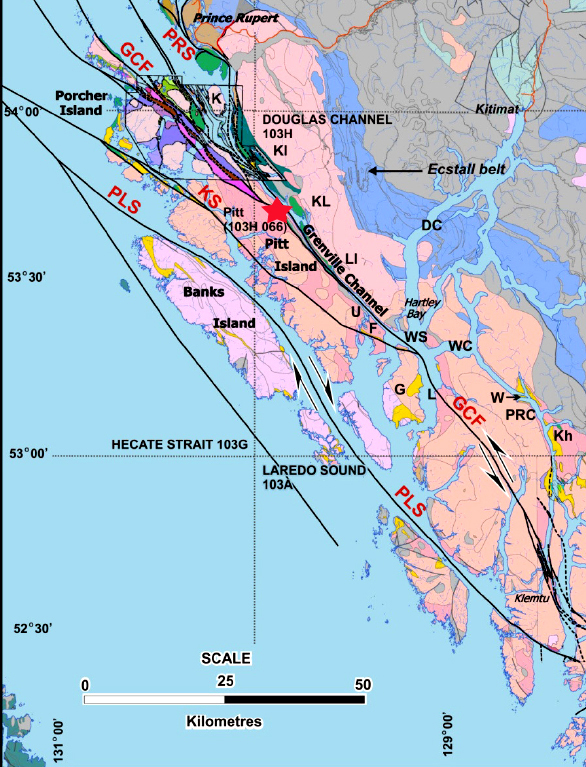 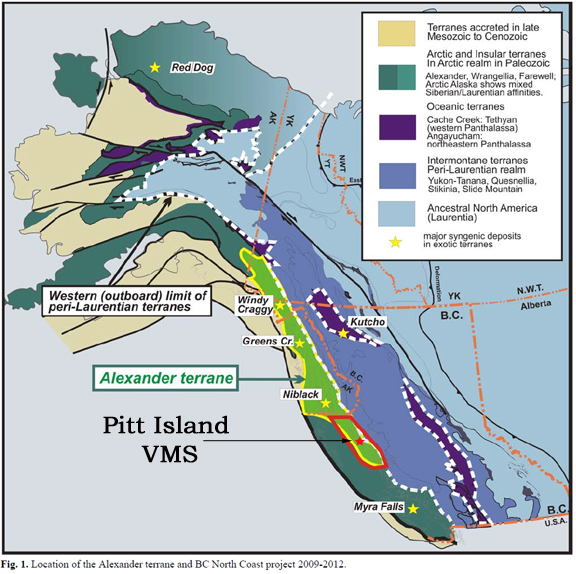 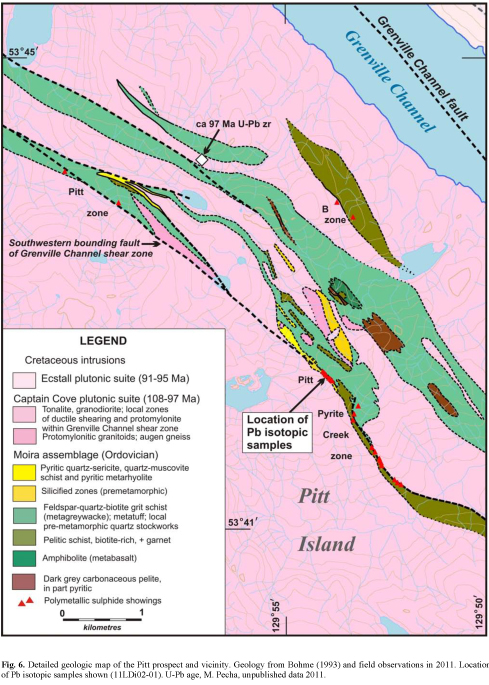 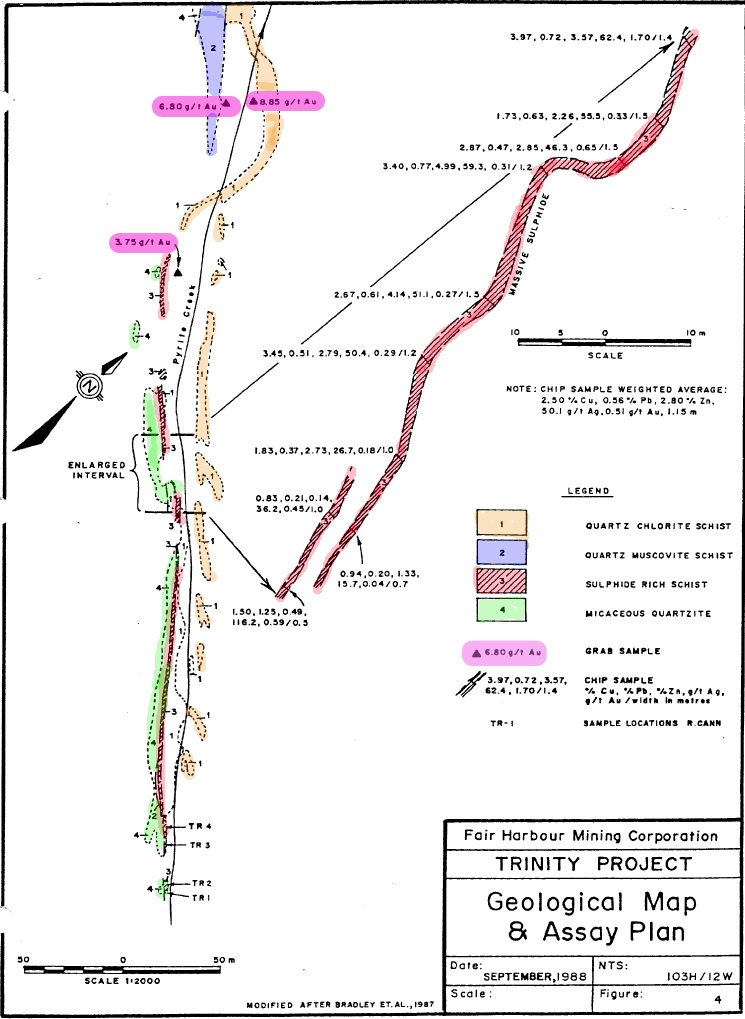 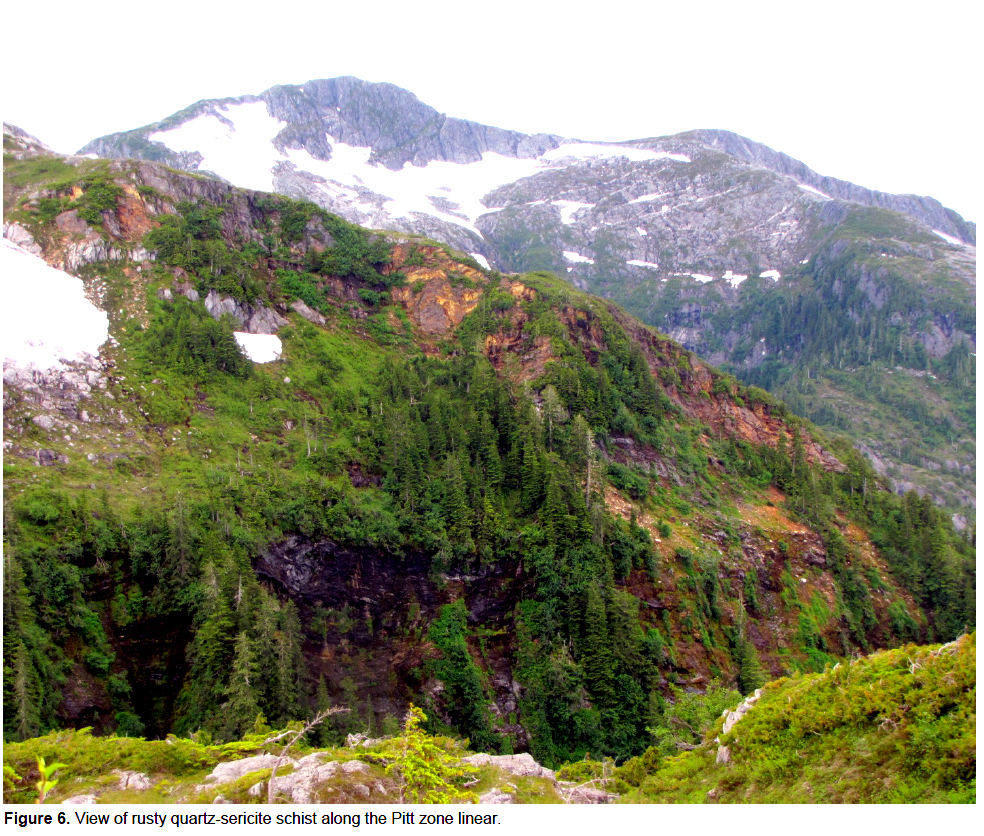 Jim McCrea P.Geo has reviewed and approves the information for the Glitter King Property.

The Glitter King (formally the Pit Island) VMS project is located approximately 90 kilometers south-southeast of Prince Rupert on Pitt Island, which is one of the uninhabited islands of the BC northwest coast. Pitt Island is bounded on the east by Grenville Channel which is part of the inside channel shipping route. The property is centered at latitude 53' 43' and longitude 129' 52'.

This massive sulphide occurrence was discovered in 1980 by Ryan Exploration Company Ltd. (a subsidiary of US Borax Ltd.) while conducting regional exploration along the British Columbia coast. Attracted by a rusty gossan in Pyrite Creek, the discovery of massive sulphides led to exploration and property mapping to determine the geological setting of this polymetallic mineralization (Bradley, 1987). Subsequent exploration in 1992 adopted previously defined units, and conducted ground and airborne geophysical surveys that led to the discovery of additional showings (Bohme, 1993; Lo, 1992). Geological Fieldwork 2011, Paper 2012-1 165.

Located 3.5 kilometres apart along strike, they correspond with a prominent northwesterly topographic lineament, marked by incised drainages and rusty oxidized gossans, along which evidence for a major fault is reported (Bohme, 1993). In both zones, pyrite-rich, semi-massive and massive sulphides occur in quartz-muscovite schist interlayered with meta-arenite (quartzite), ±garnet-quartzbiotite schist and carbonaceous argillite.

Current access is by helicopter from Prince Rupert. If required in the future, a 3 km long access road could be readily constructed along the valley floor from the Grenville Channel shipping lane to an area just below the showings.

Sulfide mineralization on the Glitter King claim appears to be massive and has a probable syngenetic origin. However, intense metamorphism has distorted most of the original sedimentary features, which hinders accurate interpretations of the sulfide genesis. The host rocks are metasediments probably derived from the re-working of volcanic and volcaniclastic rocks. Amphibolites, which represent metamorphosed volcanic flow units, support this premise. The predominant northwest trending foliation, which parallels the Grenville Channel Fault, more than likely has an important role in the sulfide mineralization.

The claims are underlain by a pendant of Pre-Mesozoic metavolcanic and metasedimentary rock which host a sulphide-rich schist horizon. Within the pyritic schist a polymetallic massive sulphide zone has been traced on surface for about 800 metres
The zone is interpreted from geophysical surveys to extend for at least an additional 500 m. In late August, 1982 a VLF-EM survey was conducted over 14.9 km of grid covering Pyrite Creek and the sulphide showing. The survey delineated a strong, linear conductor with a strike length of 1.3 km which is coincident with the showing.

Another separate zone… the B Creek zone is in a separate metasedimentary-metavolcanic inlier 2.5 kilometres northeast of Pyrite Creek. This zone has had very limited exploration.
The previous drilling program has confirmed that the sulphide zone has continuity along strike and to depth over narrow to moderate widths. While the massive sulphide zone is relatively narrow, base metal grades are high and are accompanied by moderate to high precious metal concentrations. Large sulphide boulders located along strike from Hole 89-4 indicate thicker segments of the sulphide horizon are present and warrant evaluation.
The true thickness of sulphides varies between 0.2 and 1.6 metres. Principal sulphide minerals consist of pyrite, chalcopyrite, sphalerite, pyrrhotite, galena, covellite and possibly bornite.

Overburden obscures the southeast extension of the deposit. However the stream sediment, soil geochemical and IP/resistivity surveys indicate that the base metal-bearing massive sulphide zone extends to the southeast, along the geological trend.

During the drilling program, several large base metal-rich massive sulphide boulders, ranging up to 3 metres in diameter, were discovered in Pyrite Creek, approximately 150 metres along strike from Hole 89-4. The outcrop source of the boulders lies on a steep slope approximately 15 metres above Pyrite Creek.

Rebagliati Geological Consulting Ltd. - northwest. The VLF-EM survey indicates that a 1,200 metre long conductor is associated with the tectonized sulphide-rich schist which parallels the Pyrite Creek shear and steeply incised gorge. This conductor extends at least 300 m beyond the geologically mapped area and is open along strike in both directions.

CONCLUSIONS
The diamond drilling program has confirmed that the IP anomaly extending from 55+00W to 57+00W is caused by the same base metal rich massive sulphide horizon exposed in Pyrite Creek. There is a reasonable possibility that this massive sulphide horizon extends to the southeast to reconnaissance IP line 52+00W and well beyond.
The zone is also open to the northwest.

Although the massive sulphide horizon was relatively narrow where drilled, the 1989 program clearly demonstrated that the sulphide horizon has strike and dip continuity with high base metal concentrations accompanied by a modest to high gold and silver content extending to at least 70 metres below surface.

The large massive sulphide boulders in Pyrite Creek indicate that the sulphide horizon thickens along strike to the northwest. Additional diamond drilling is warranted to explore for thicker segments of the extensive sulphide zone along strike and to further evaluate the IP anomalies.