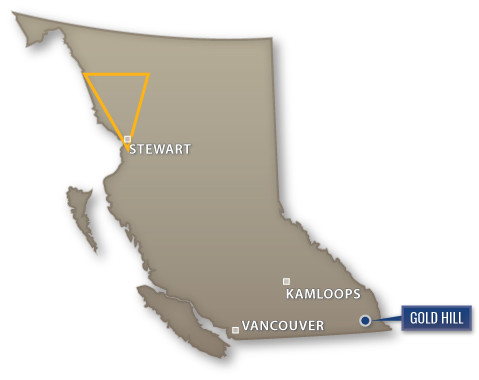 Jim McCrea P.Geo has reviewed and approves the information for the Gold Hill Property.

Gold on the Wild Horse River was discovered in the fall of 1863 by American prospectors. The river was originally known as Stud Horse Creek. The Wild Horse River yielded close to 48 tons (around $2,000,000,000 in today’s dollars) in gold during the gold rush. It is believed that a far greater amount was mined and never accounted for.  The river is considered to be one of the greatest gold creeks in the entire province of British Columbia. A placer miner named Mike Reynolds who mined the river in the 1860s recovered a 36 ounce gold nugget. This was the largest nugget recovered from the river. The river was mined using many methods including hydraulics, tunnels, and shafts. During the Gold Rush this river went through two eras of great activity. The first era was from 1863 to 1868 and the second was from 1885 to 1900. The river was worked by both European and Chinese miners.

Fort Steele and Fisherville shone brightly in their glory years of the 1860’s. They were rough, rip-roaring frontier towns full of the riff-raff that chased after gold from California in 1849 up through Helena, Montana and Coeur d’Alene, Idaho to the Kootenay region of B.C. just north of the border.

The majority of the gold taken from the river was located along a 6km stretch between Boulder Creek (upstream) and Brewery Creek (downstream). While there was some gold found further upstream from Boulder Creek, its quantity increased dramatically where this steep creek empties into the much more level Wild horse River. Brewery Creek greatly contributes to the flow of the Wild Horse and therefore it is likely that far less gold was found below this point as much of it would be carried out to the much larger Kootenay River. While most of the gold has been taken from the placer deposits downstream from Gold Hill, there are still placer operations in the area ranging from small scale panning / sluicing to full scale mining operations.

The main placer gold in Bolder Creek starts about where the Mause Creek Fault crosses Boulder Creek (within the American Creek claims).  Mause Creek Fault runs perpendicular to Boulder Creek and is associated with the Jubilee Bedrock Formation which crosses from south side of the valey (Gold Hill / Midas claims) to the north side of the valley (Big Chief claim).  The Jubilee Formation is believed to be very conduisve to enriched gold deposition which fed the Boulder Creek, which fed the Wild Horse river. 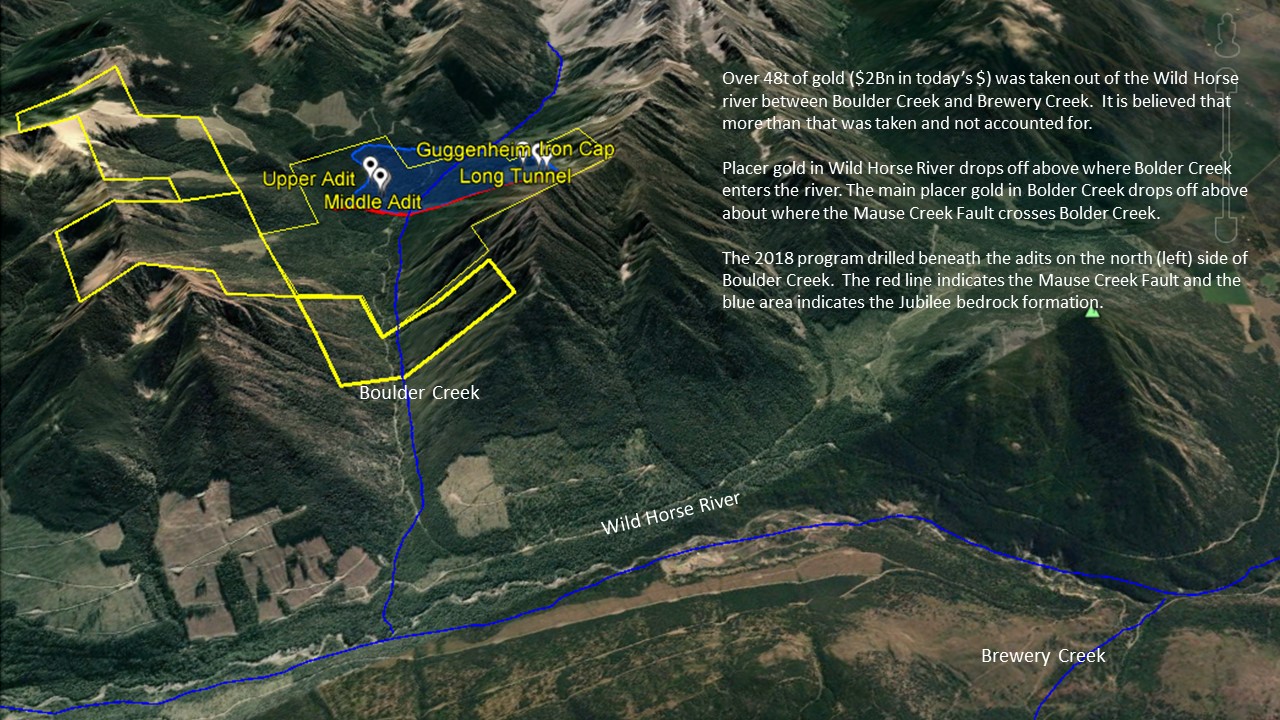 During the second era of activity efforts were made to trace the source(s) of the placer gold. This led explorers (including geologists from Cominco) up Boulder Creek to what is now called the Gold Hill property. This property constitutes a significant portion of the Boulder Creek watershed including two main areas where gold was recovered by Cominco (along with others). These areas are known as the Big Chief claim (upper, middle, and lower adits) and Gold Hill / Midas claims (Iron Cap, Guggenheim, and Long Tunnel adits) located approximately 1.5km to the south on the opposite side of the drainage.  These showings are on -strike and are connected by the Mause fault and the Jubilee Formation bedrock indicating they are part of the same very large continous mineralized zone. These areas were discovered in the late 1800's as prospectors made thier way up Boulder Creek in an effort to locate the lode source and are believed to be contributing sources to the incredible resources found in the Wild Horse River. While gold was discovered on the property, the gold price in 1900 did not support extensive hard rock exploration at the time.

The historical gold on the property is referred to as “free gold”, which in mining terms means “gold not in combination with any other substance”. It also generally indicates that the gold can be liberated from its host rock through a simple process of crushing which is basically what took place in nature over millions of years to create the placer gold in the Boulder Creek and Wild Horse river.

The Big Chief showings include a number of historic workings consisting of open-cuts, prospect pits, and four small adits. The Gold Hill/Midas showing, in which the Guggenheim, Iron Cap and Long Tunnel adits are located,  also contains historic workings related to various high grade gold/silver veins.  Limited small-scale production of gold and silver occurred from both these areas on opposite sides of the drainage. Amazingly little modern exploration work has been conducted on the property in the last 50 years.

There have been numerous high grade gold samples collected from the property over the past century. A more recent example of high grade gold (13.4 ounces per tonne) is reported from a narrow quartz vein/breccia zone that occurs in the hanging wall of a northeast striking steeply northwest dipping syenite dyke (Javorsky, D., 2004).  The dyke is described as a syenite porphyry and is Cretaceous in age. A 25 cm wide quartz vein sample with visible pyrite is located 40 m upslope from the Middle Adit and ran 22.32 g/t gold.  High grade gold up to 442 g/t Au and 1660 g/t Ag has also been reported from selective grab samples of tetrahedrite and galena-bearing quartz-siderite material (Javorsky, D., 2004).

Gold Hill is accesible by forestry roads and just 13.5km from Fort Steele where there is a highway and rail.  Power is found just a few kilometers away where commercial mining continues in the Wild Horse river.   The property has been overlooked and sat dormand for many years.  American Creek was very fortunate to acquire a property with such a rich history and such great potential. 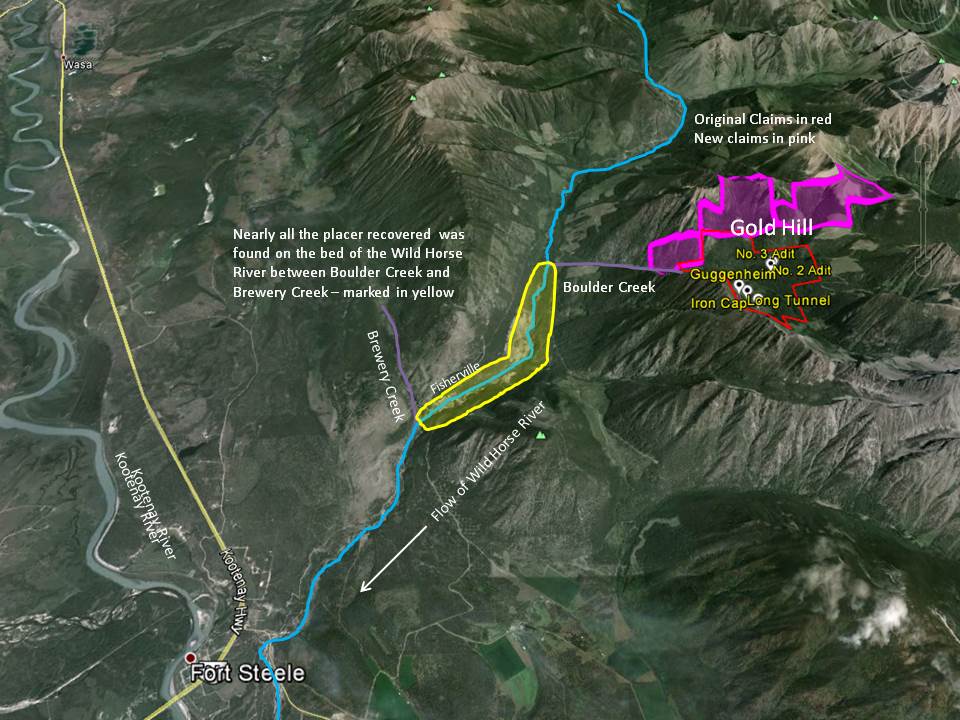 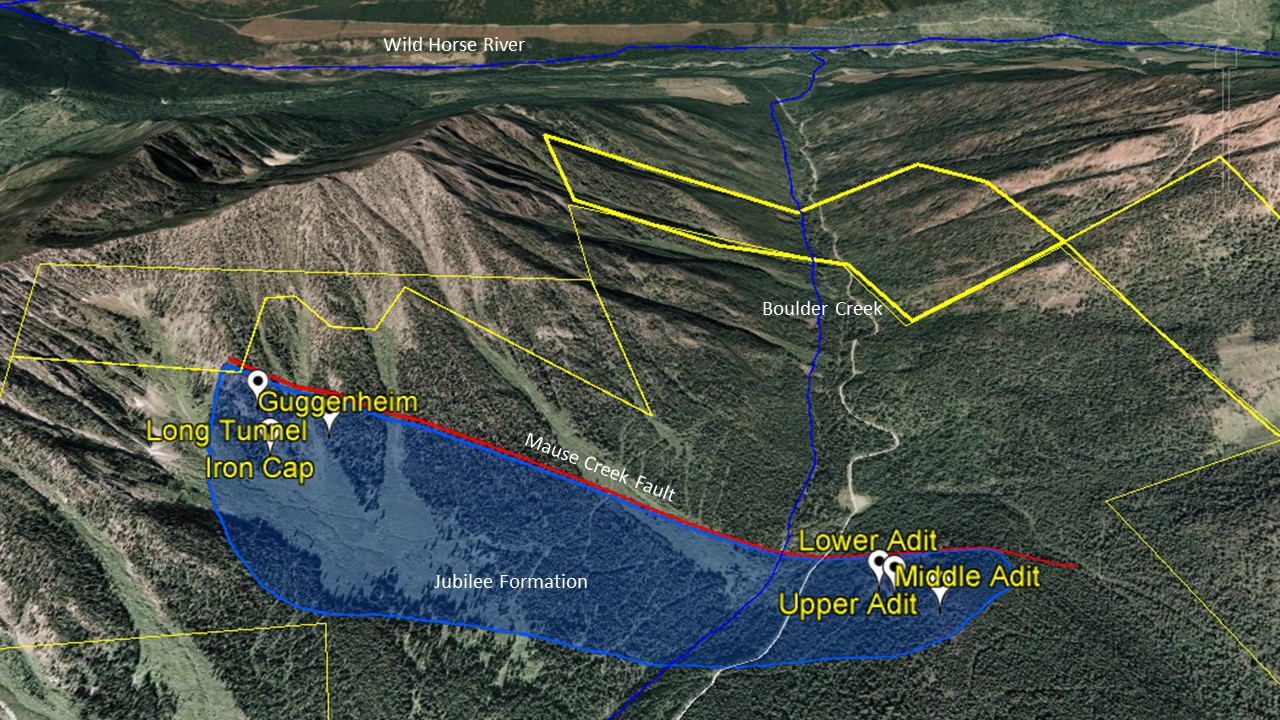 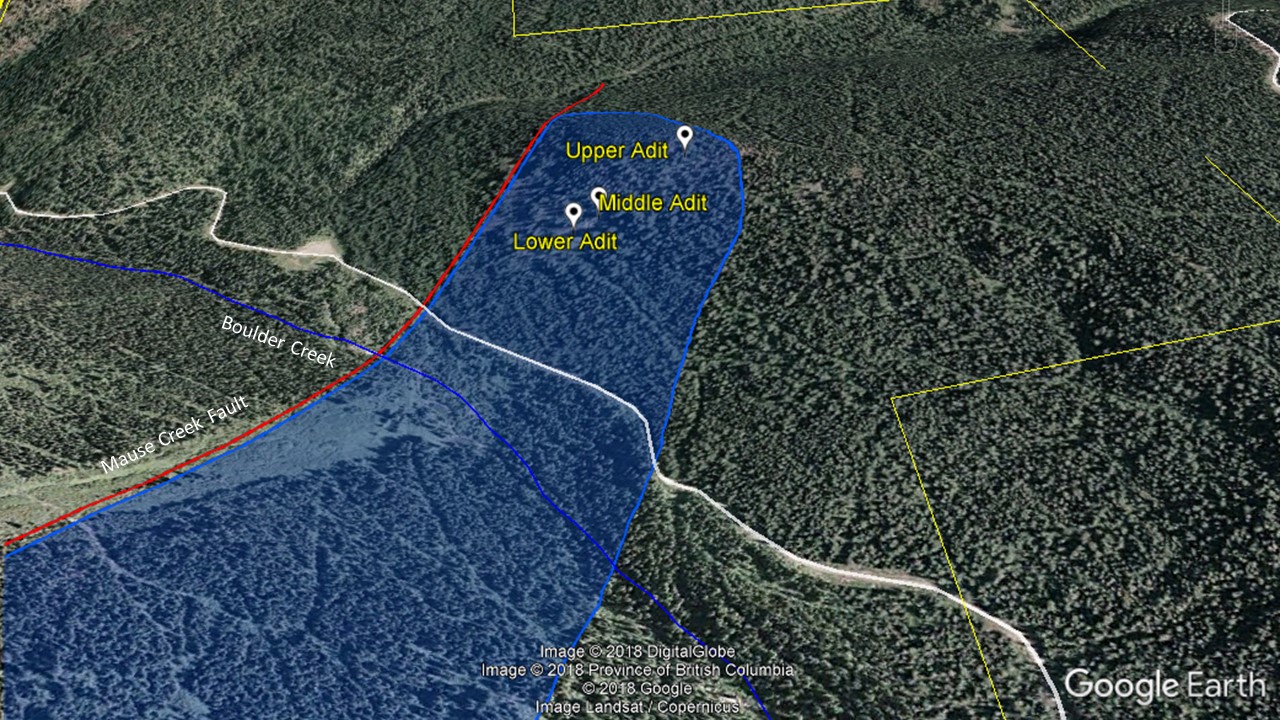 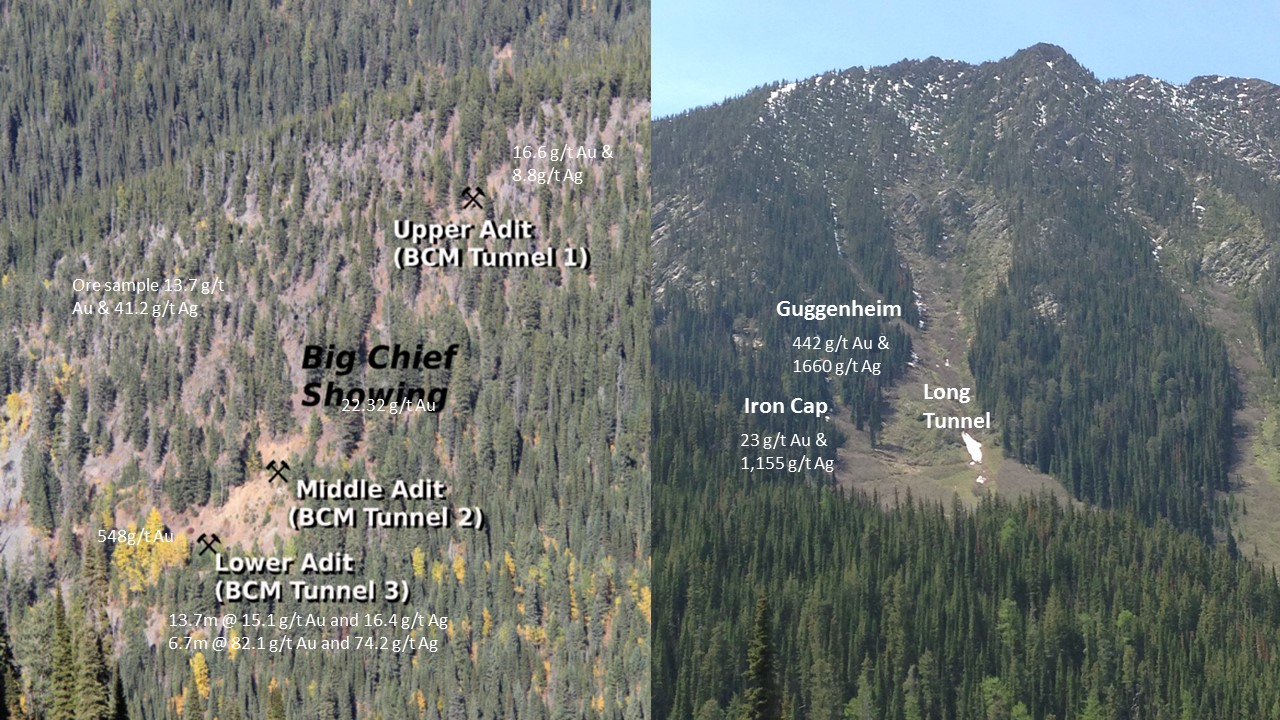 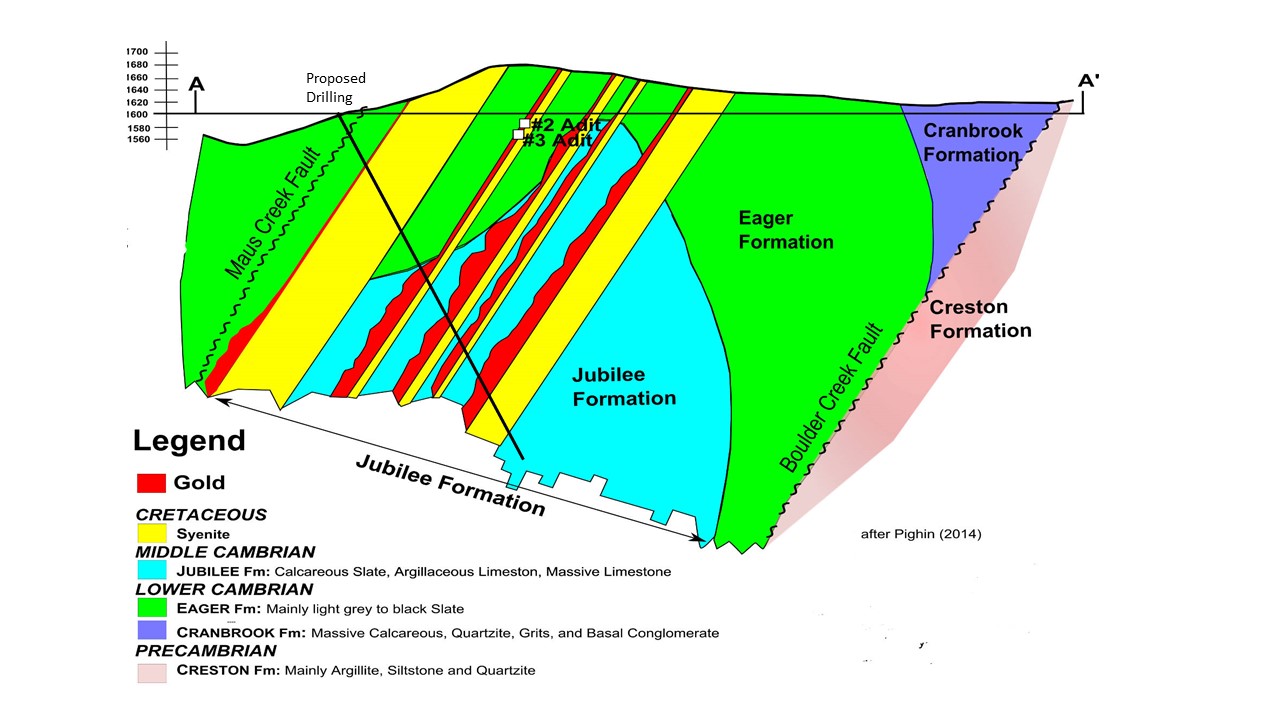 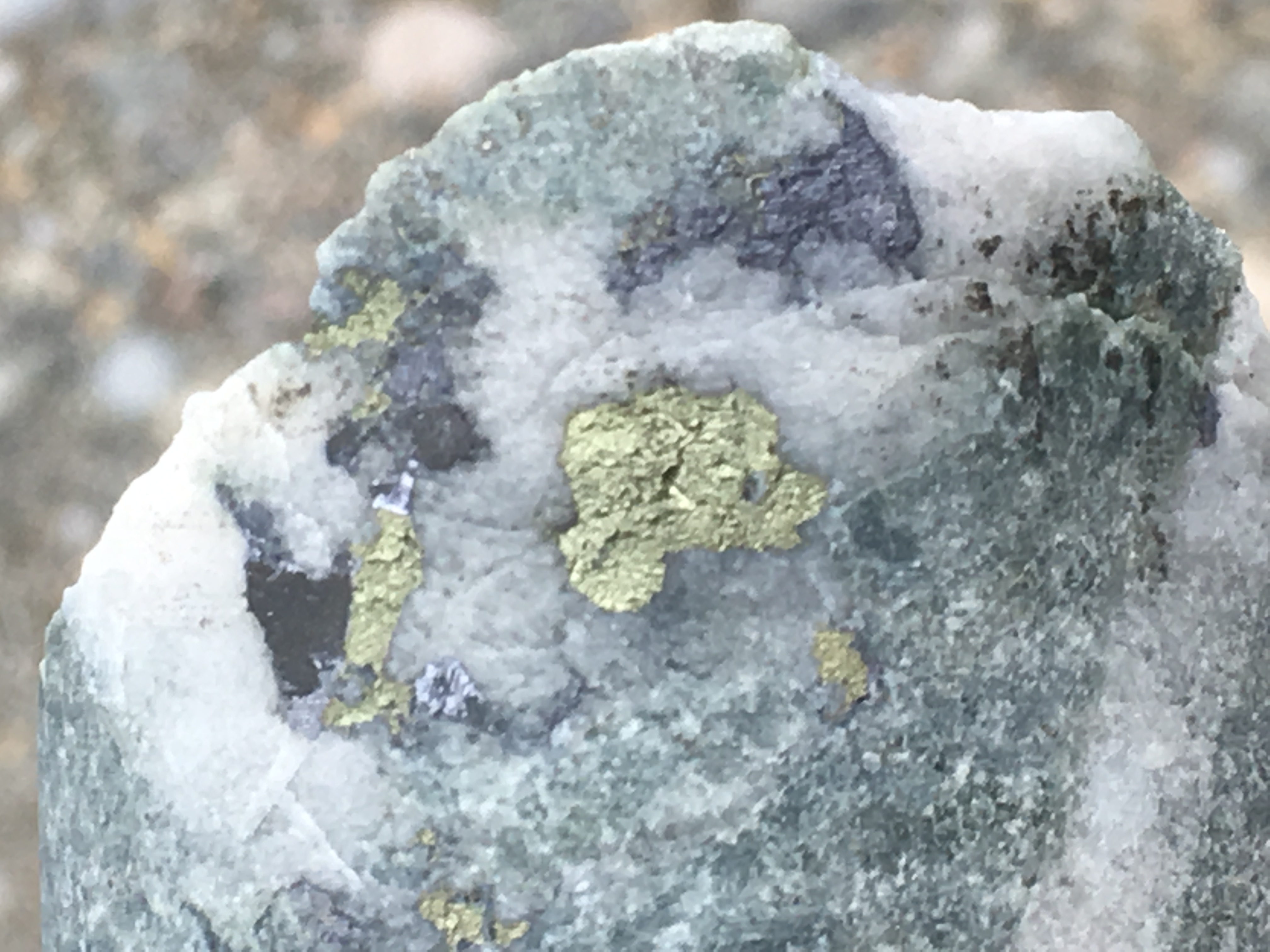 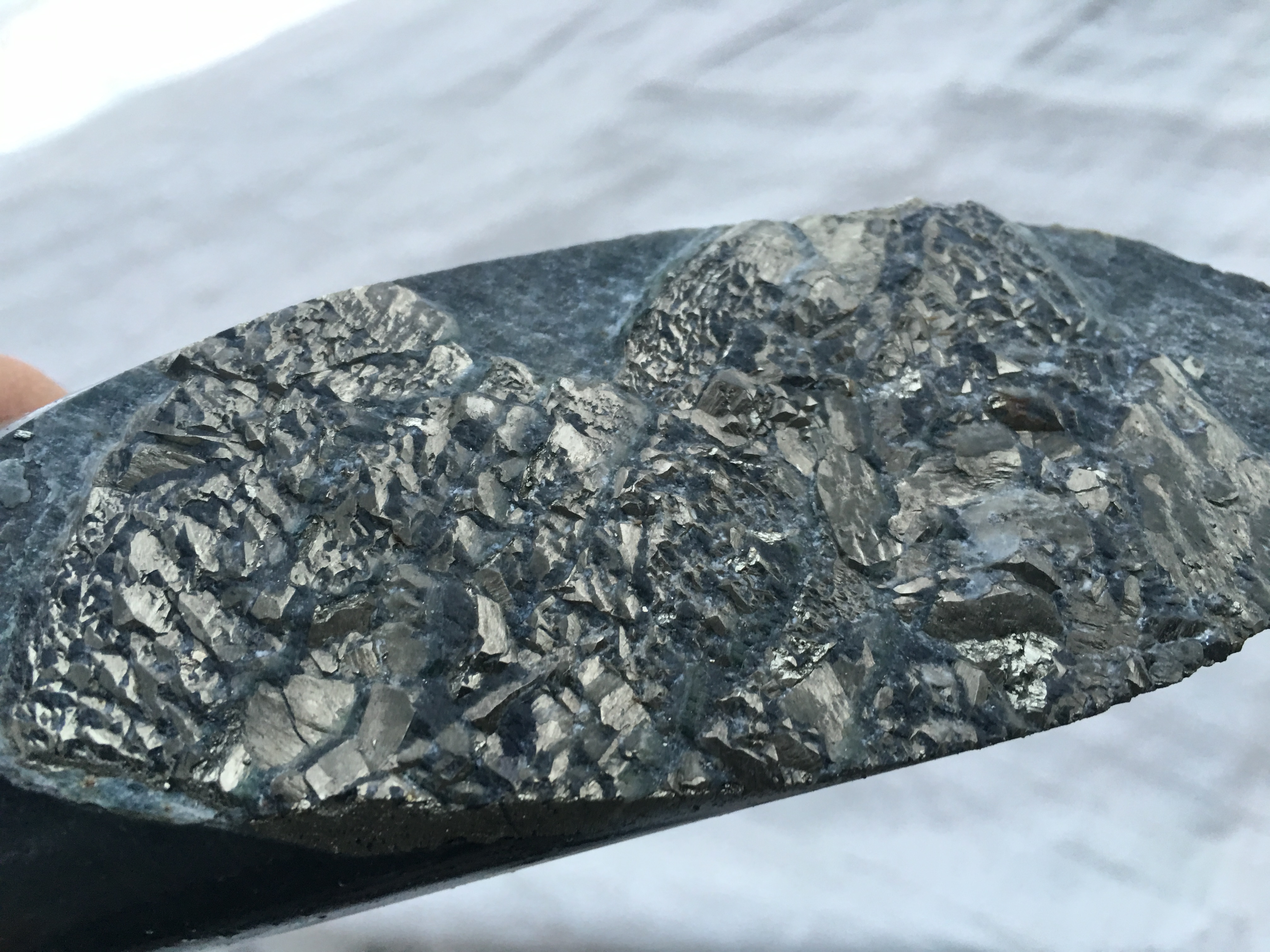 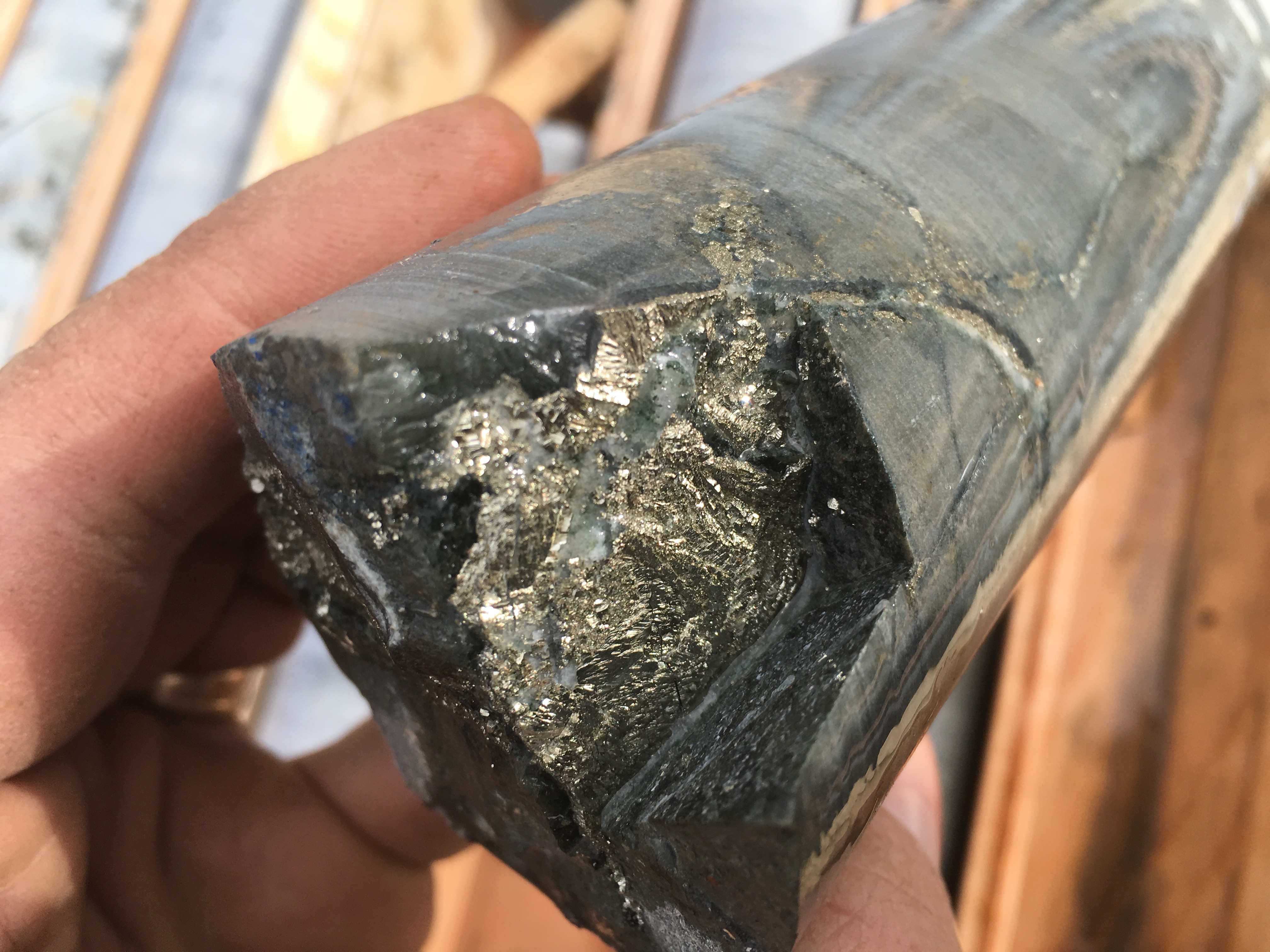 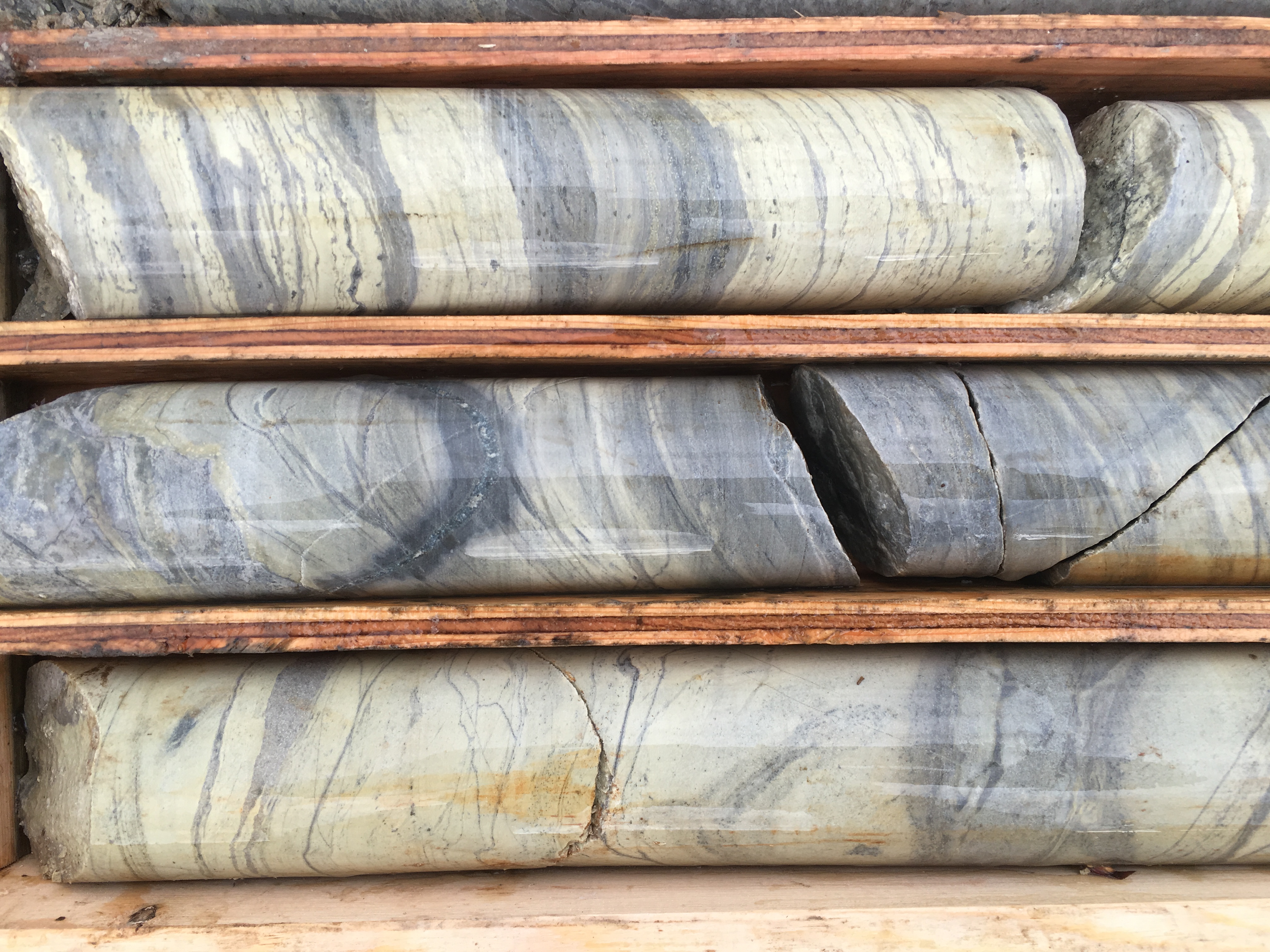 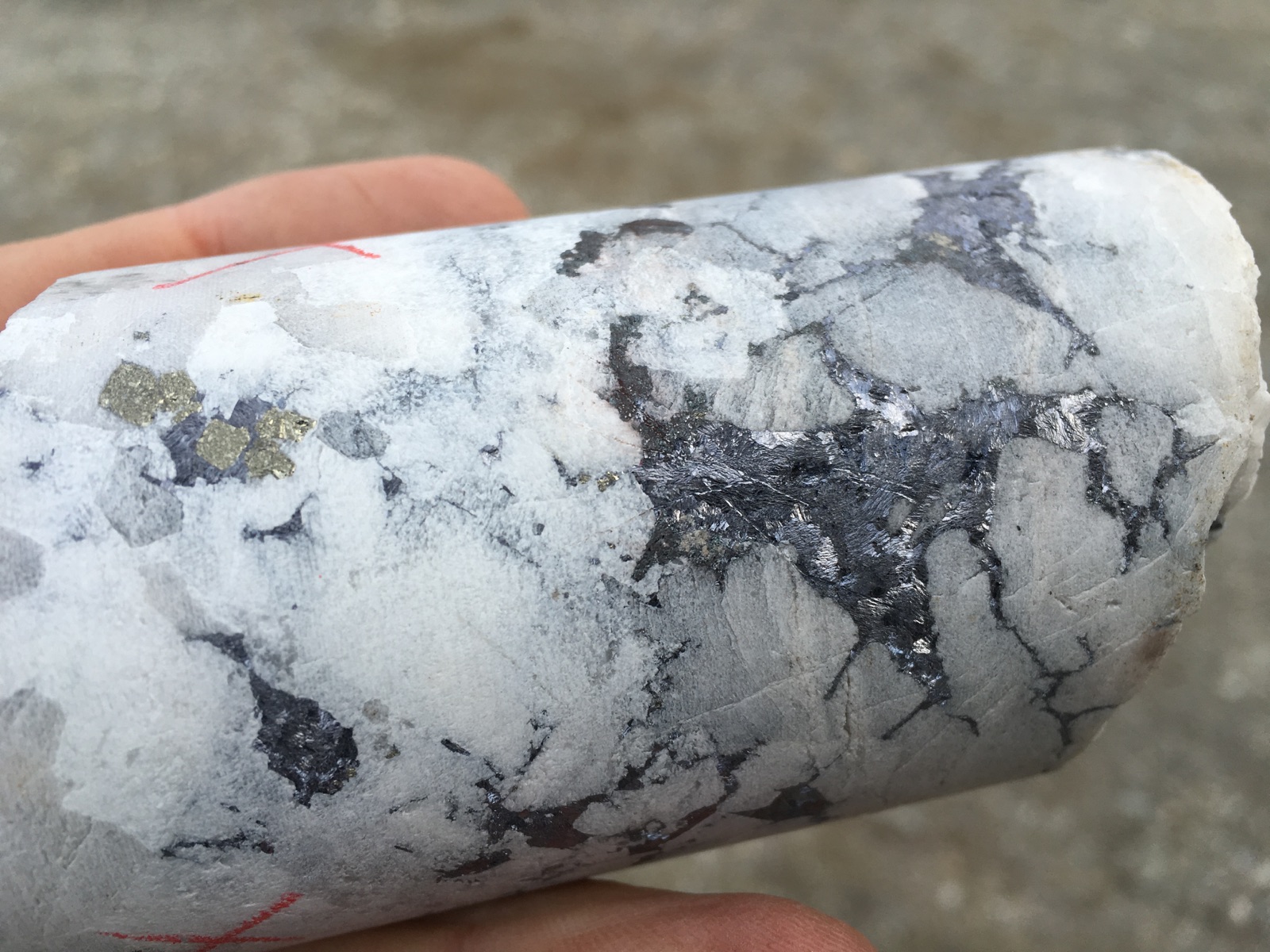 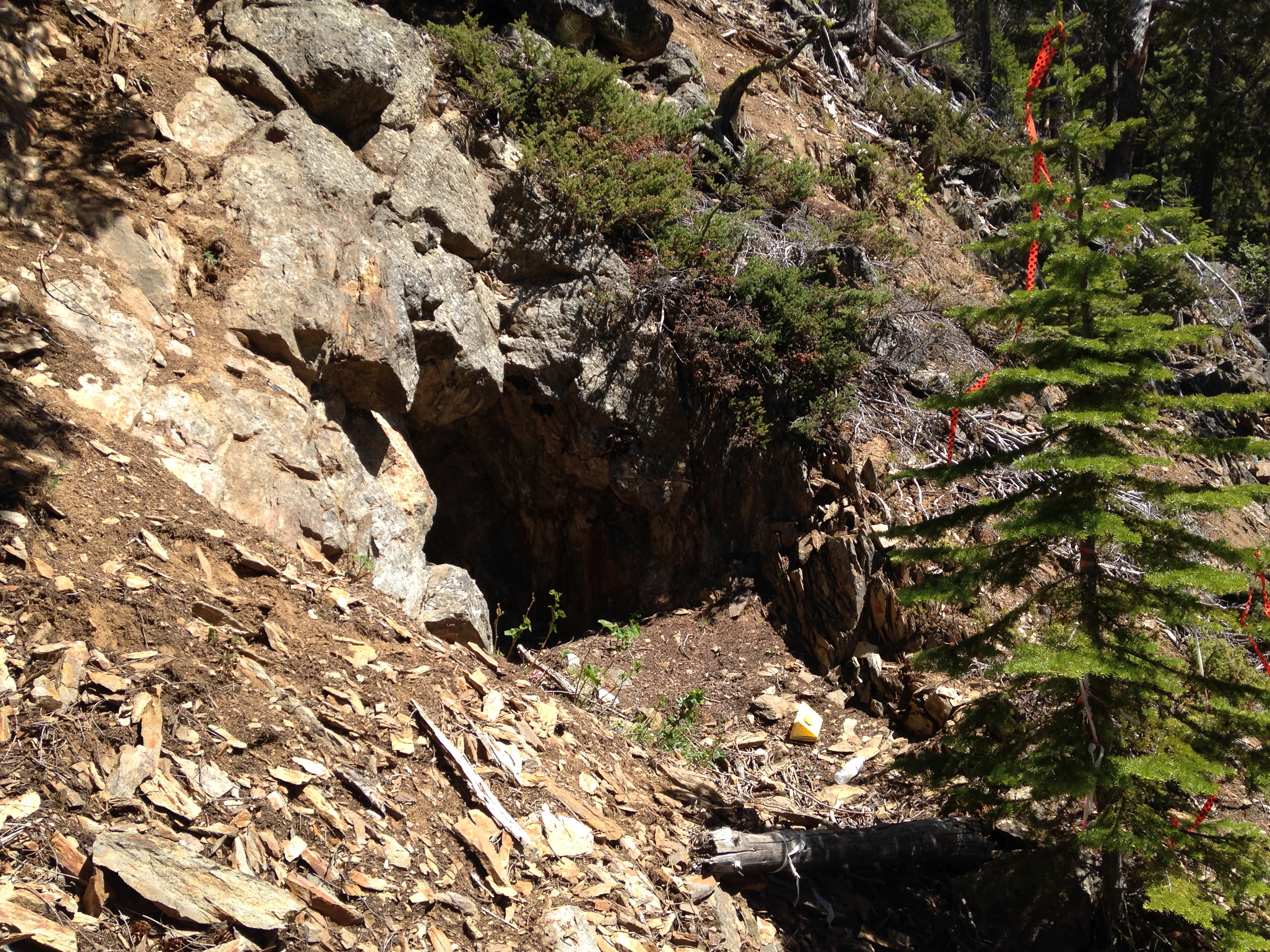 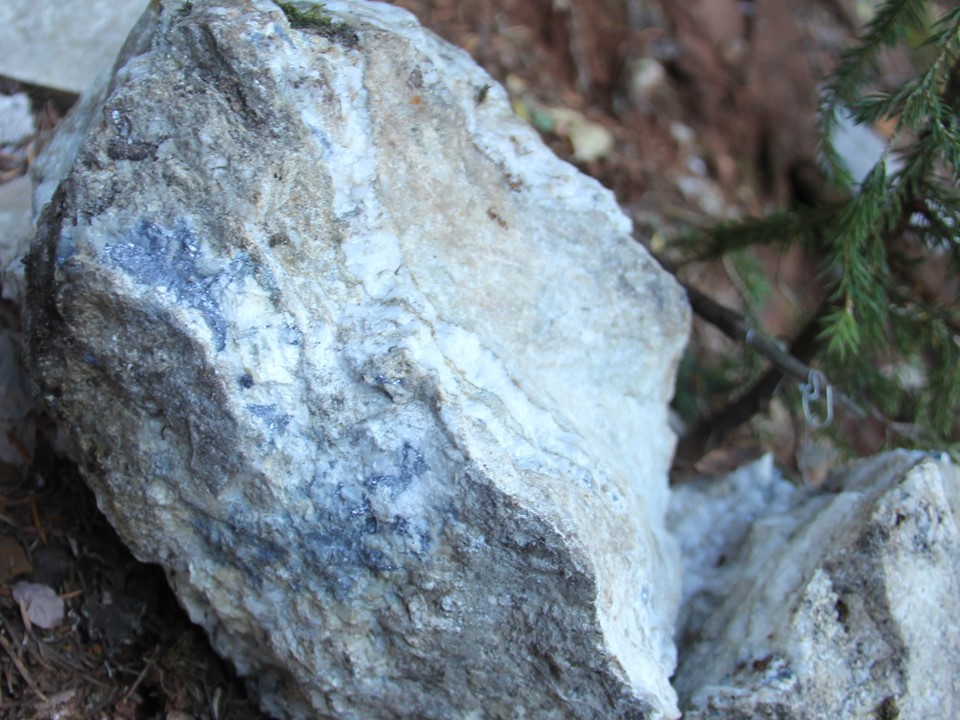 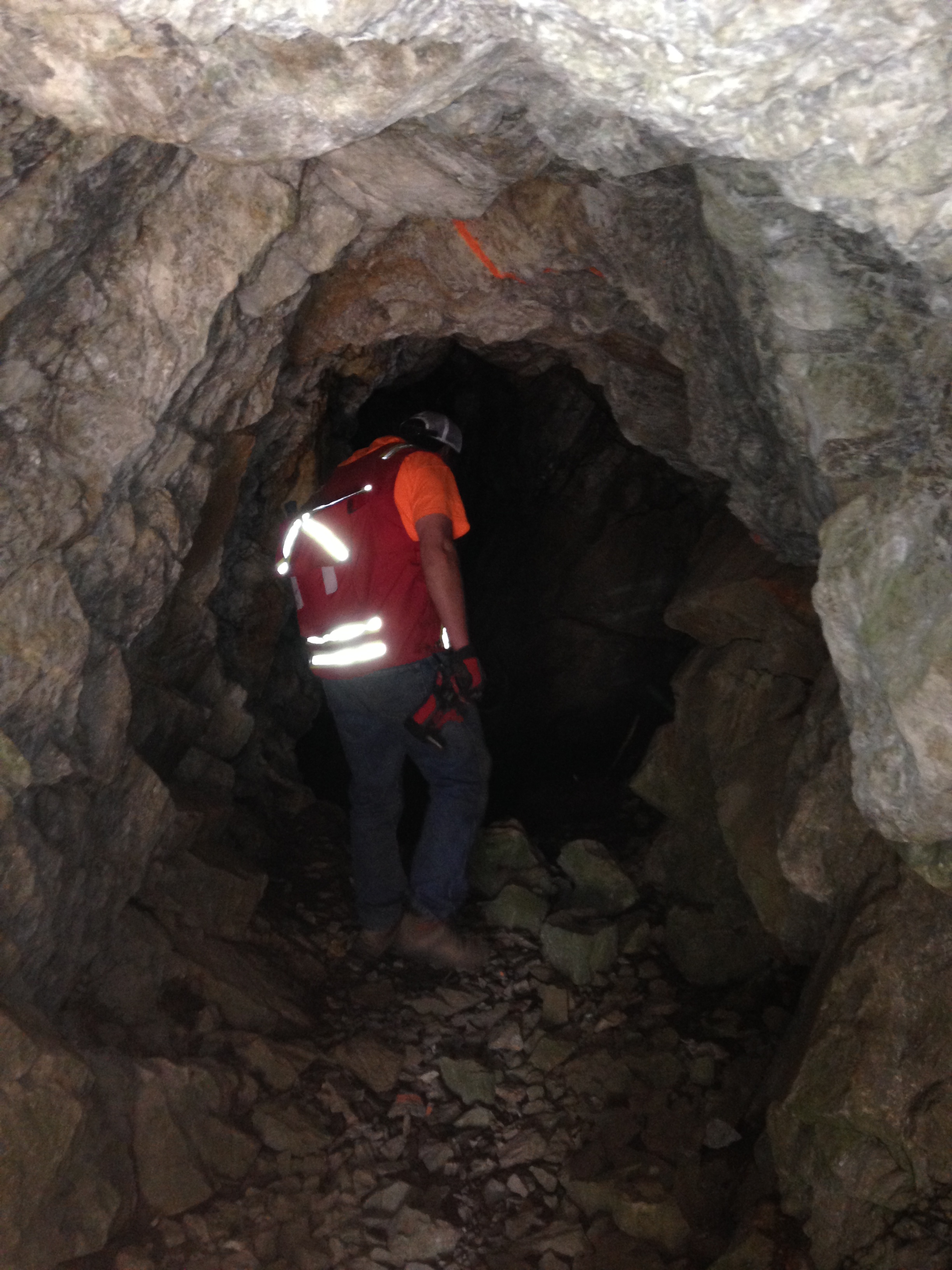 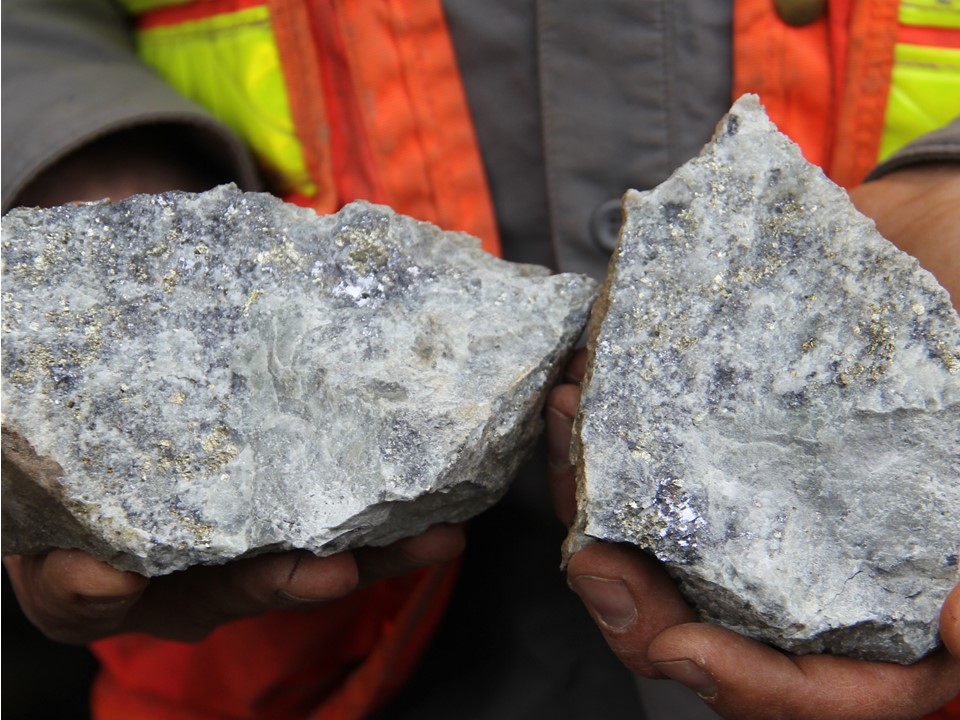