The Silver Side Property is located in the Kamloops Mining division and is located about 20 kilometres north of Clearwater BC on the west side of the Raft River.

Local topography ranges from a rolling plateau on the west side of the claim to a steep east facing slope down to the Raft River on the east side.

The property is located near the transition of the Eagle Bay Assemblage to the southeast and the Shuswap metamorphic complex to the east and northeast.

The property has little recorded history. In 1979 Cominco completed a soil and silt sampling program as a follow up to a very strong RGS zinc in silt anomaly on a creek draining the present claims.

The soil survey outlined several coincident zinc and lead anomalies over a 1 Sq Km area, and the report mentioned that the property covered metasediments and intrusives of the Shuswap Metamorphic Complex. (Carter,1979).

A follow up program completed by (Murrell, 1981) produced a preliminary geological map and discussed that a “main showing” of high grade zinc sulphide mineralization had been discovered, and that others were located over at least a 1000 meter north-south trending strike. No sample results were recorded.

The high grade zinc, lead and silver mineralization located to date on the SILVER SIDE Property occurs within a small east facing canyon within a north striking steeply west dipping band of metamorphosed carbonates of either Eagle Bay or Shuswap metamorphic complex origin.

The sedimentary package appears to be with a north striking reverse fault system. The showings suggest that they are from Manto style mineralization and not directly from a syngenetic source. 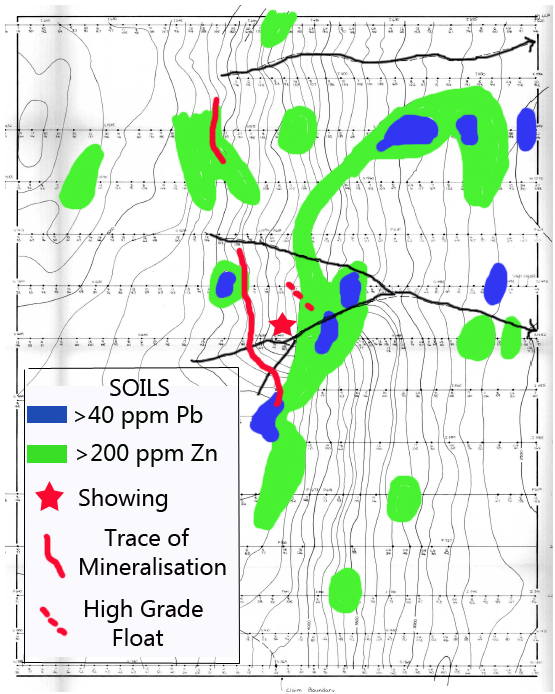 These showing have been traced over 100 metres and in several distinct horizons.

The mineralization is open in all directions.

At least 4 high grade Zn-Ag-Pb showings associated with deformed and metamorphosed carbonates of either Eagle bay or Shuswap rocks in close proximity to Mesozoic and Cretaceous and/or Tertiary intrusives have been discovered on the property.

The prospective carbonate horizon extends for at least 2.5 kilometres.

The Silver Side property is located about 50 Km west of the Ruddock Creek deposit.

Drill indicated reserves at Ruddock Creek are over 5 million tonnes grading 2.5 per cent lead and 7.5 per cent zinc.