After seeing the article I put out this morning, AMK President Darren Blaney "suggested" that I put out the final draft of my trip to Treaty Creek opposed to my initial draft (which was accidently sent out).  Please delete the previous version, read this version, and feel free to share it with all your friends.

I recently visited the Treaty Creek Project where I gained further insights regarding this incredible property. I put together this summary of the trip in an effort to share what I learned while there.

Some background - I spent a good part of the summer of 2007 and 2009 on the property and even survived a helicopter crash on Seabridge’s adjacent Iron Cap deposit in 2008 (not recommended) so it was great to get back and soak up what I could from JV partner Tudor’s head geologist Ken Konkin.  By the way, please click on the images to get a larger version as this is a visually stunning property!

Accompanying me on the visit was Bill Shaw, the editor of Commodity Supercycles, Gold and Silver Investor, and a regular contributing analyst for Investment Advisory for Stansberry Research, one of the premier investment research firms in North America. 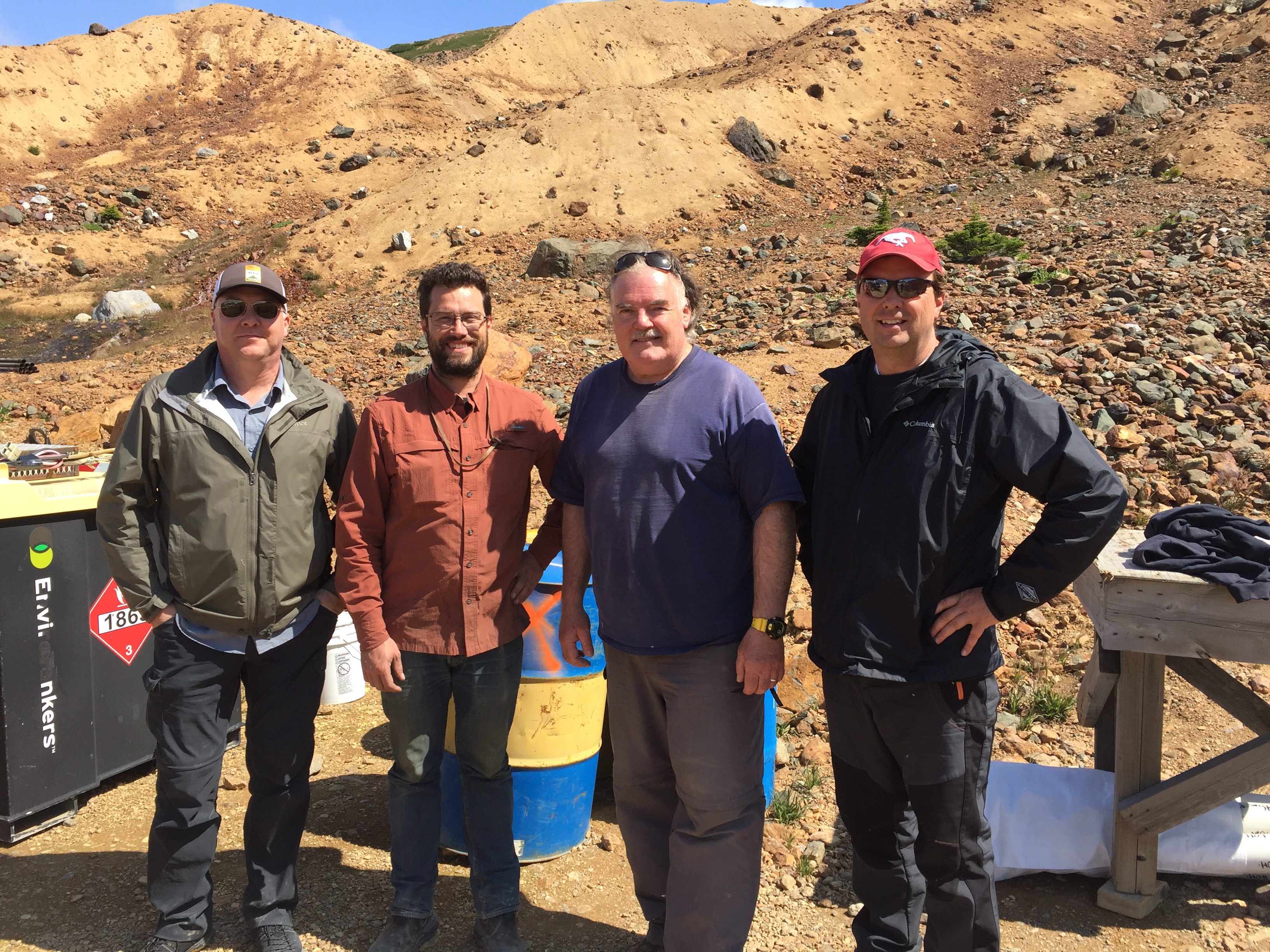 Part I will be focused on the big picture and then in part II I will focus on the Goldstorm zone being drilled right now.  I’m approaching it this way because Konkin places emphasis on understanding the big picture first and then getting into the finer details later. With his amazing track record, I’m following his lead on this one!

Referring to Konkin’s statement above, he talks about a “frequency for occurrence, frequency for distribution, structural traps, and a predictable rhythm”.  He says that the Sulphurets Hydrothermal System (SHS) is a perfect example of the frequency or rhythm that exists in large metallic systems.

In this case, Konkin points out that approximately every 2.5 km within this SHS there is a major deposit. Starting with Seabridge’s Kerr deposit in the south and then heading northward we have the Sulphurets, Mitchell, and Iron Cap deposits in series.  Crossing the boundary onto the Treaty Creek property and another 5 km to the north (and right on que) is the Goldstorm deposit.  Approximately half-way between the Iron Cap and the Goldstorm is a monster 3 km wide magnetic anomaly (on the Treaty Creek property) that coincides with a Magnetotelluric anomaly and fault. This is the likely location for another yet undiscovered major deposit – 2.5 km each way from the adjacent deposits in series. 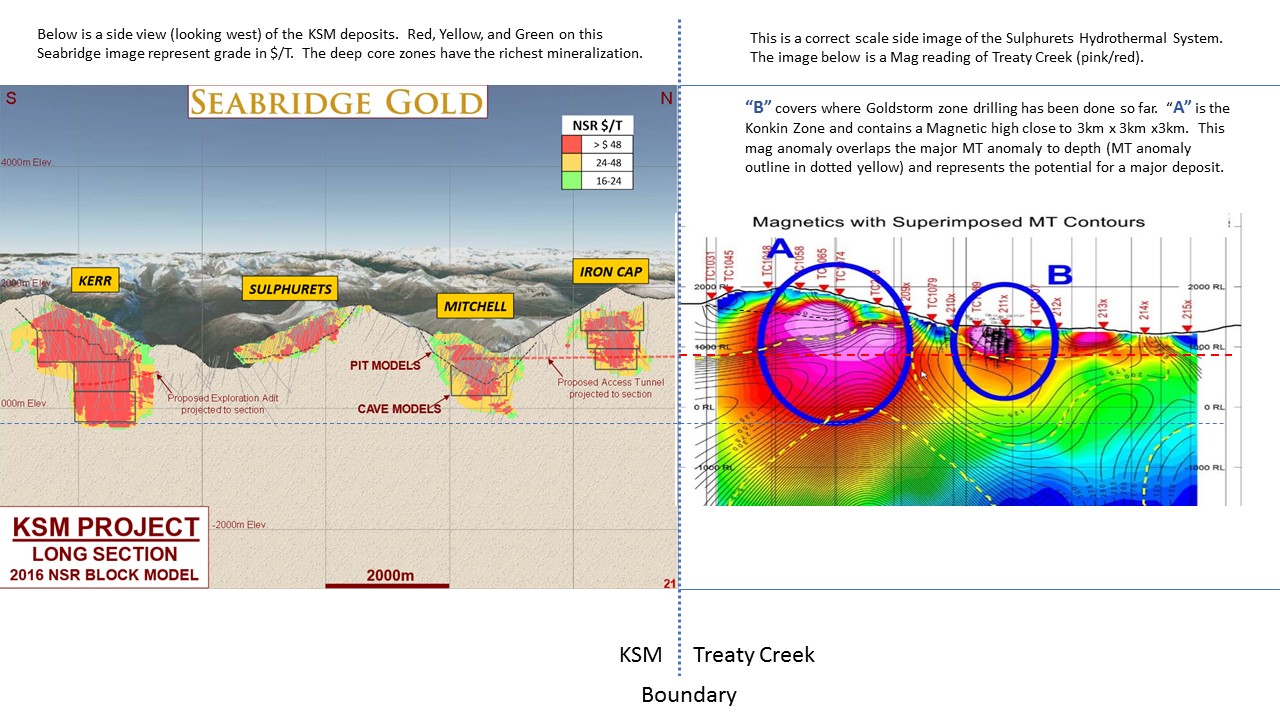 The illustration above does a good job showing “the pearls” Konkin was referring to.  There are a number of strings that connect these pearls together that include:

For more information on these read the Treaty Creek Report 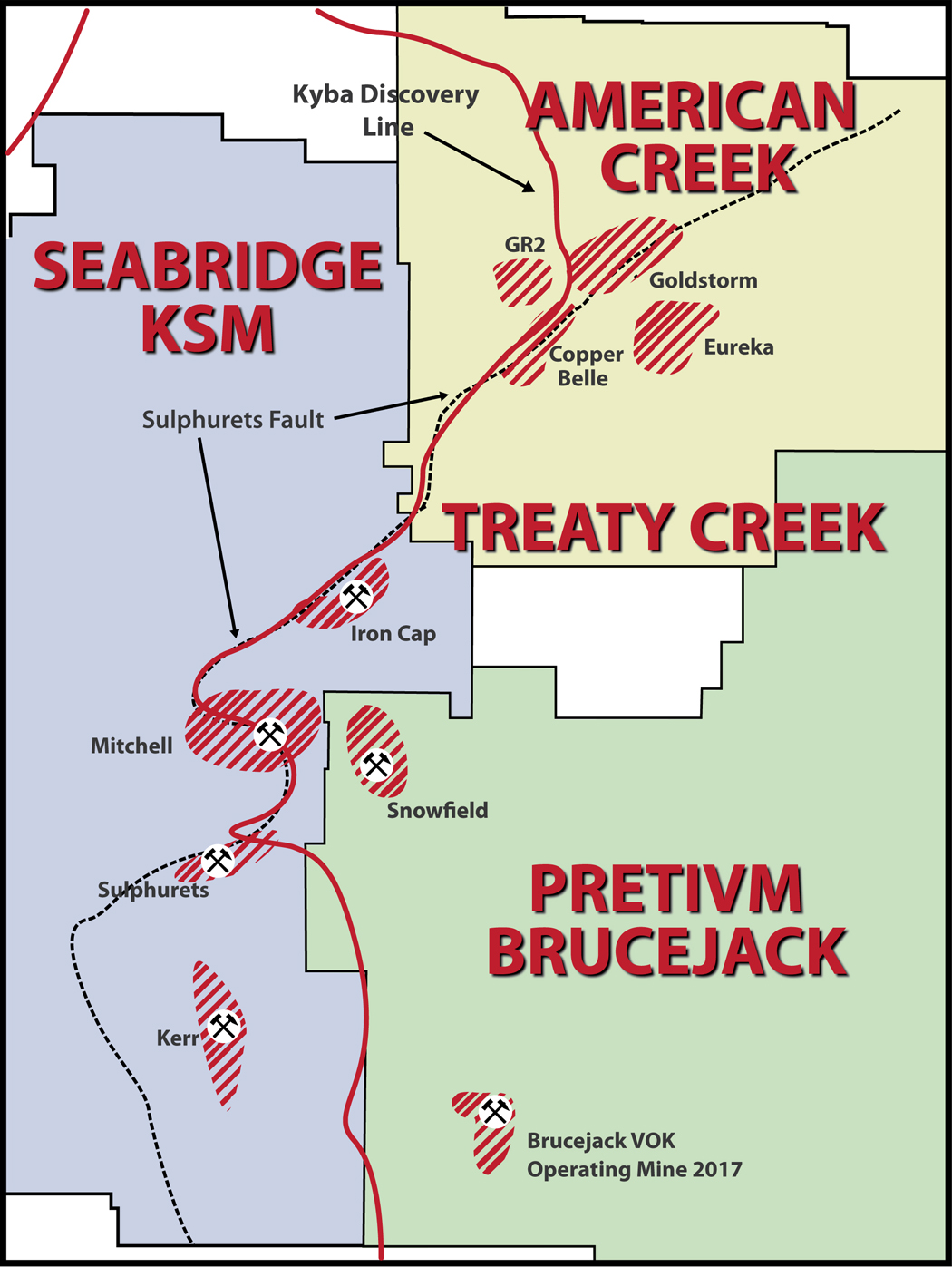 In the image below you can see the Iron Cap in the background and the Goldstorm in the foreground.  According to the “frequency” or “rhythm” of the SHS there could also possibly be a deposit to the south (left) of the Konkin zone or even one to the right of this image (a large area with little exploration to date).

The “pearls” are referring to large intrusive and porphyry deposits of world class size.  In fact, Seabridge’s KSM now constitutes the largest undeveloped gold deposit in the world by reserves.  The entire SHS contains 188M oz gold, 1.2B oz silver and 55B lbs copper to date (all categories).  In proven and probable reserves that’s 47M oz gold, 214M oz silver, and 10B lbs copper.  Treaty Creek covers the northern half of the SHS and the geology, geophysics, and structural signatures, along with exploration results, all indicate the potential to host similar grade and scale deposits as those in the southern half. 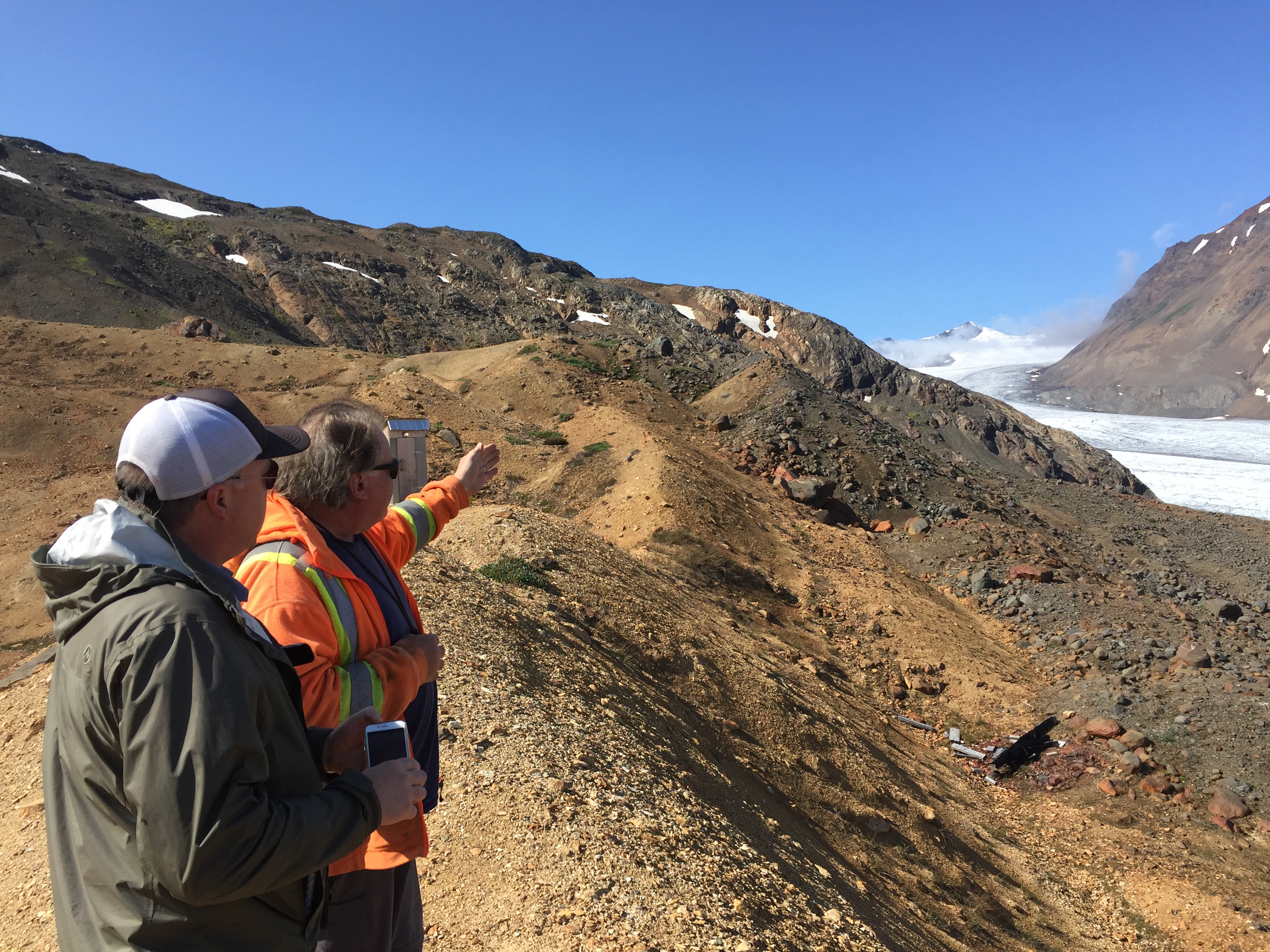 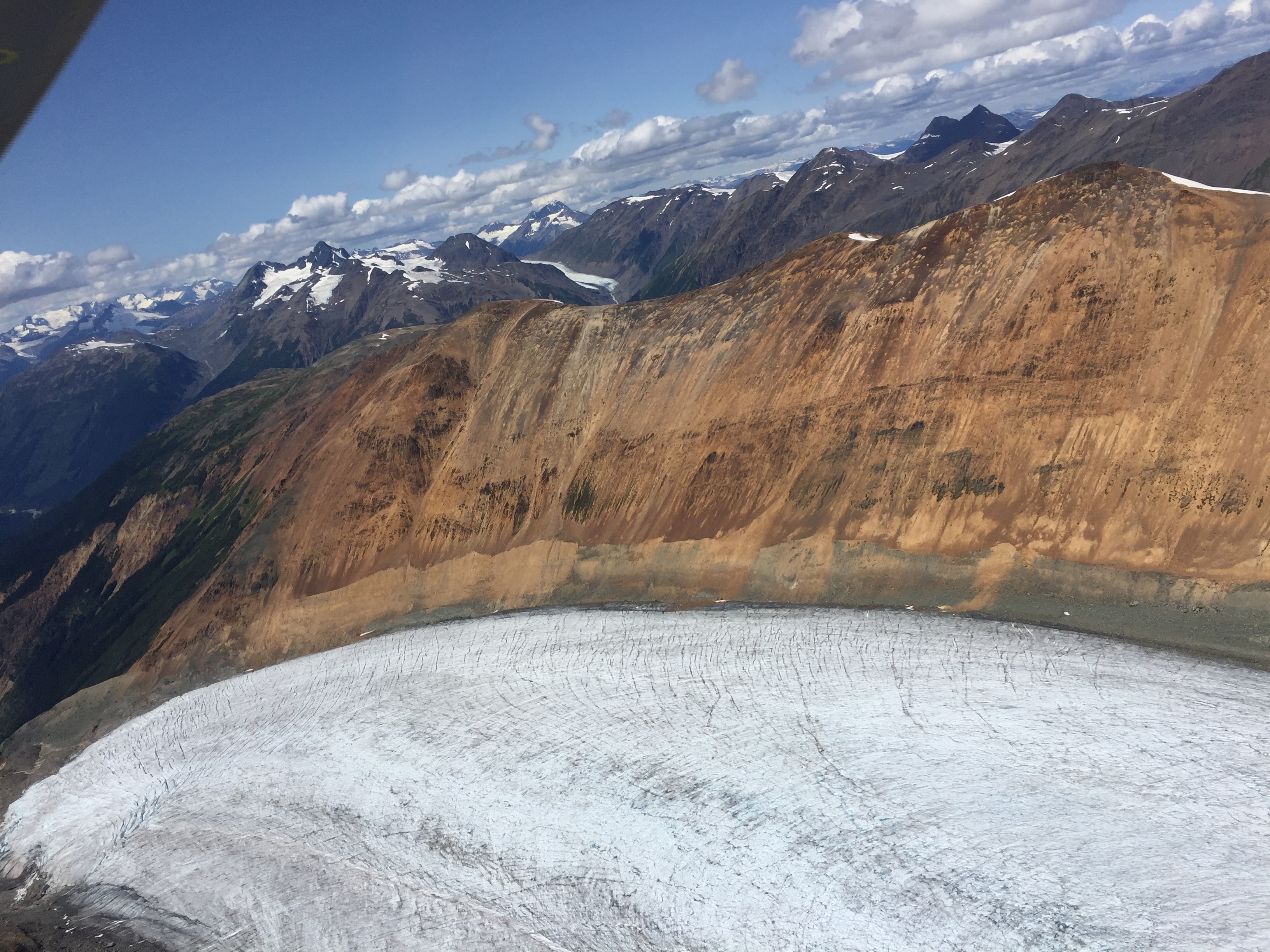 Sulphurets “pearl” on the left side of the image – the diagonal line between the “green” and “red is the Sulphurets Thrust Fault which Seabridge claims is responsible for the KSM deposits. 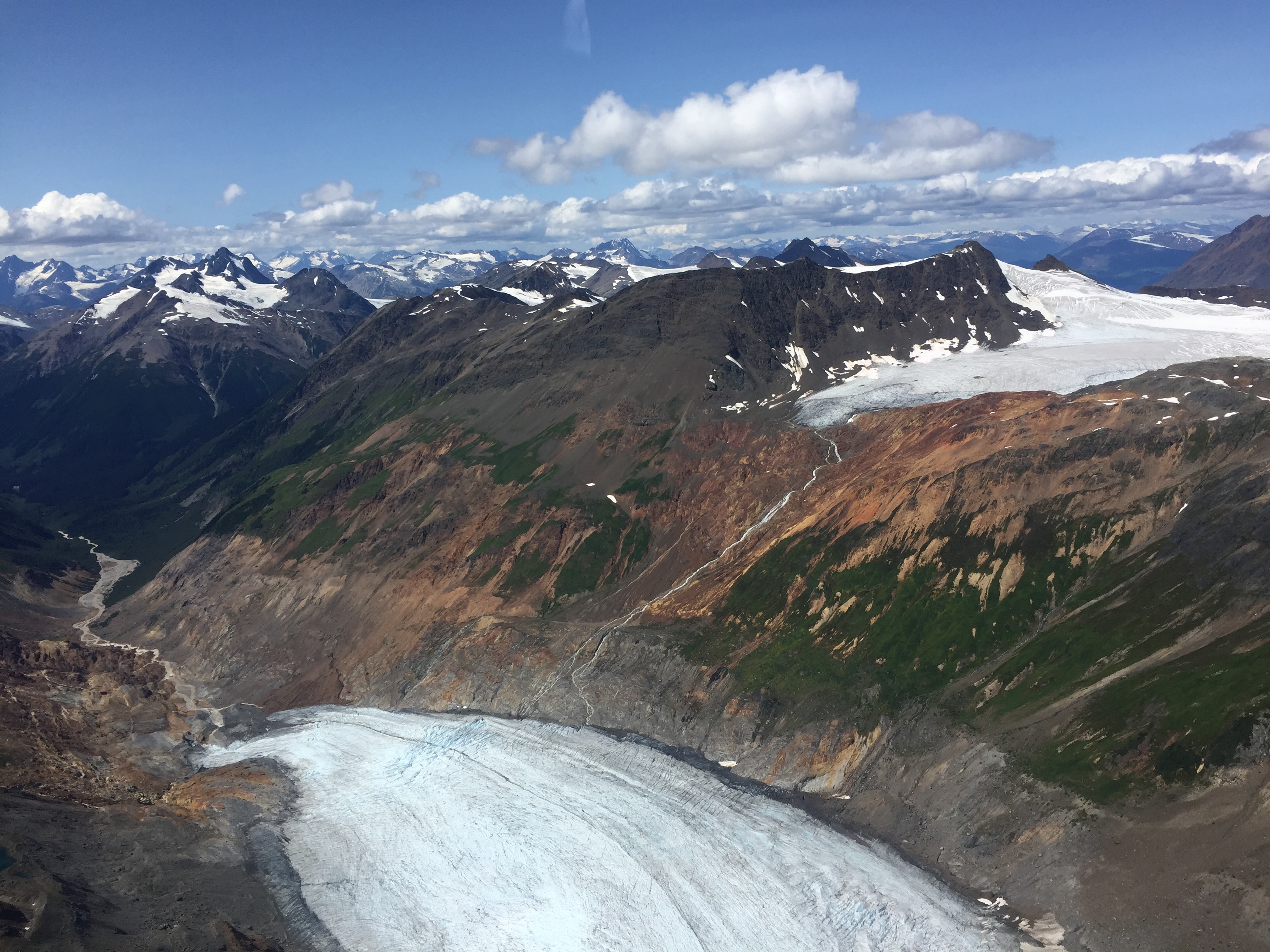 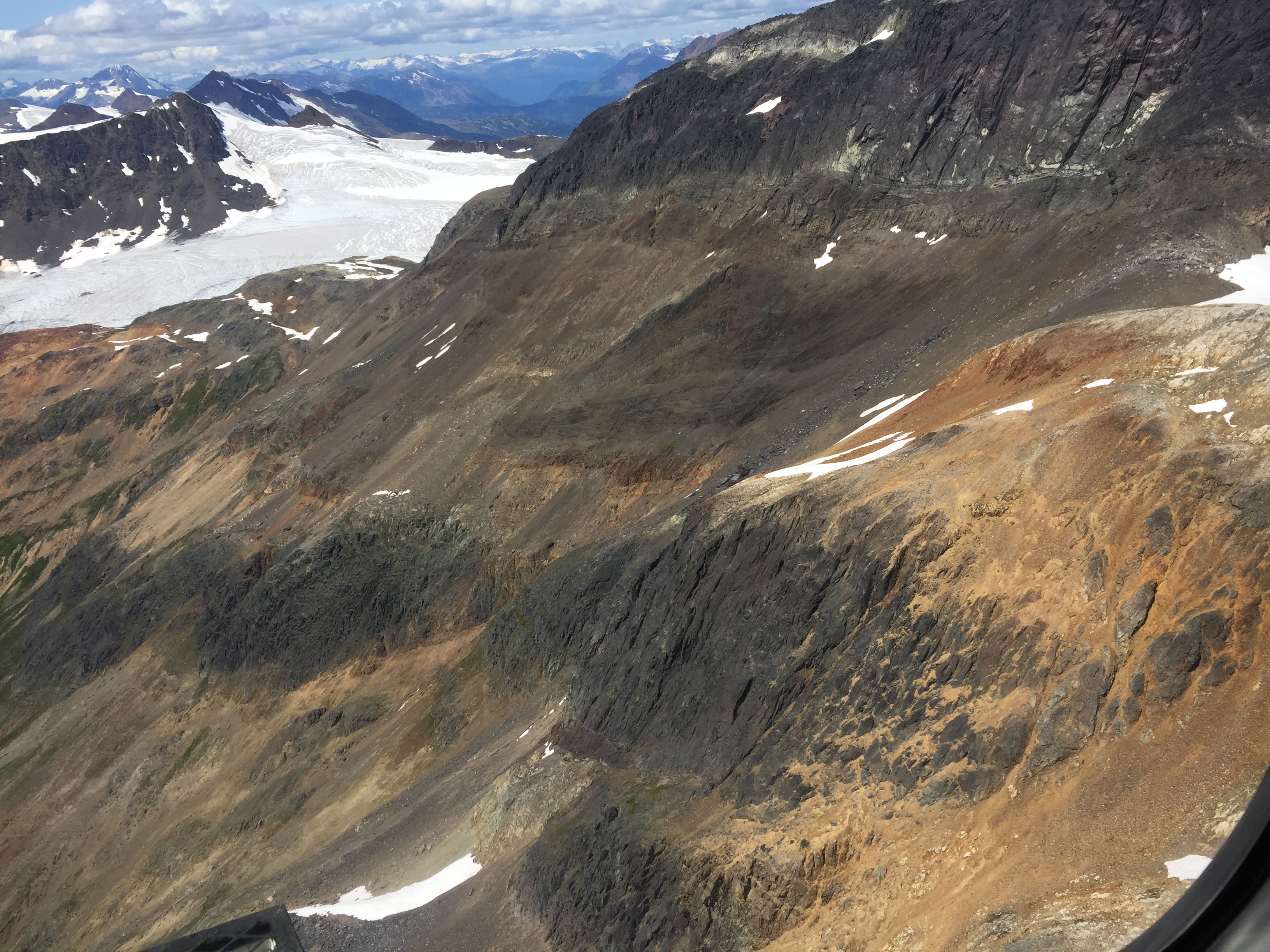 Looking west at the southern property border, with the Iron Cap on the far left and the Sulphurets Dome on the right. The Sulphurets Dome area within the Treaty Creek property has recently become an area of great geological interest. Logistically, this mountain ridge and glacier is the dividing line between the very challenging (KSM) and favorable (Treaty) side of the mountain range. This is the mountain/glacier that Seabridge is proposing to bore through/under with their twin access tunnels in order to access the north side where Treaty Creek is situated. 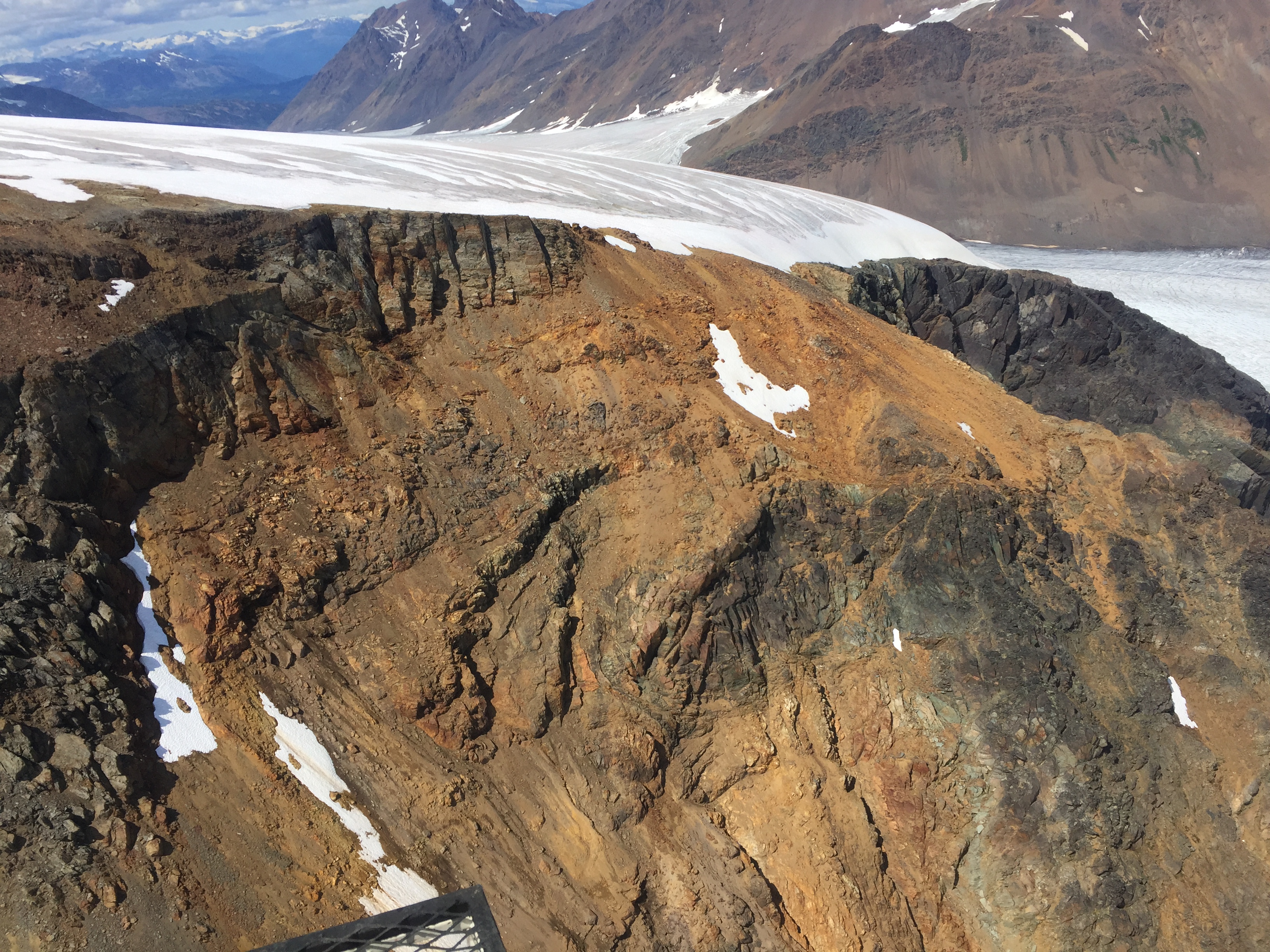 Sulphurets Dome on Treaty Creek – an area with significant faulting (including the Brucejack fault), strong magnetic highs and lows, an electromagnetic high, and rock the same age as Eskay Creek (Barrick Gold’s richest mine ever) which is located directly down the glacier in the background 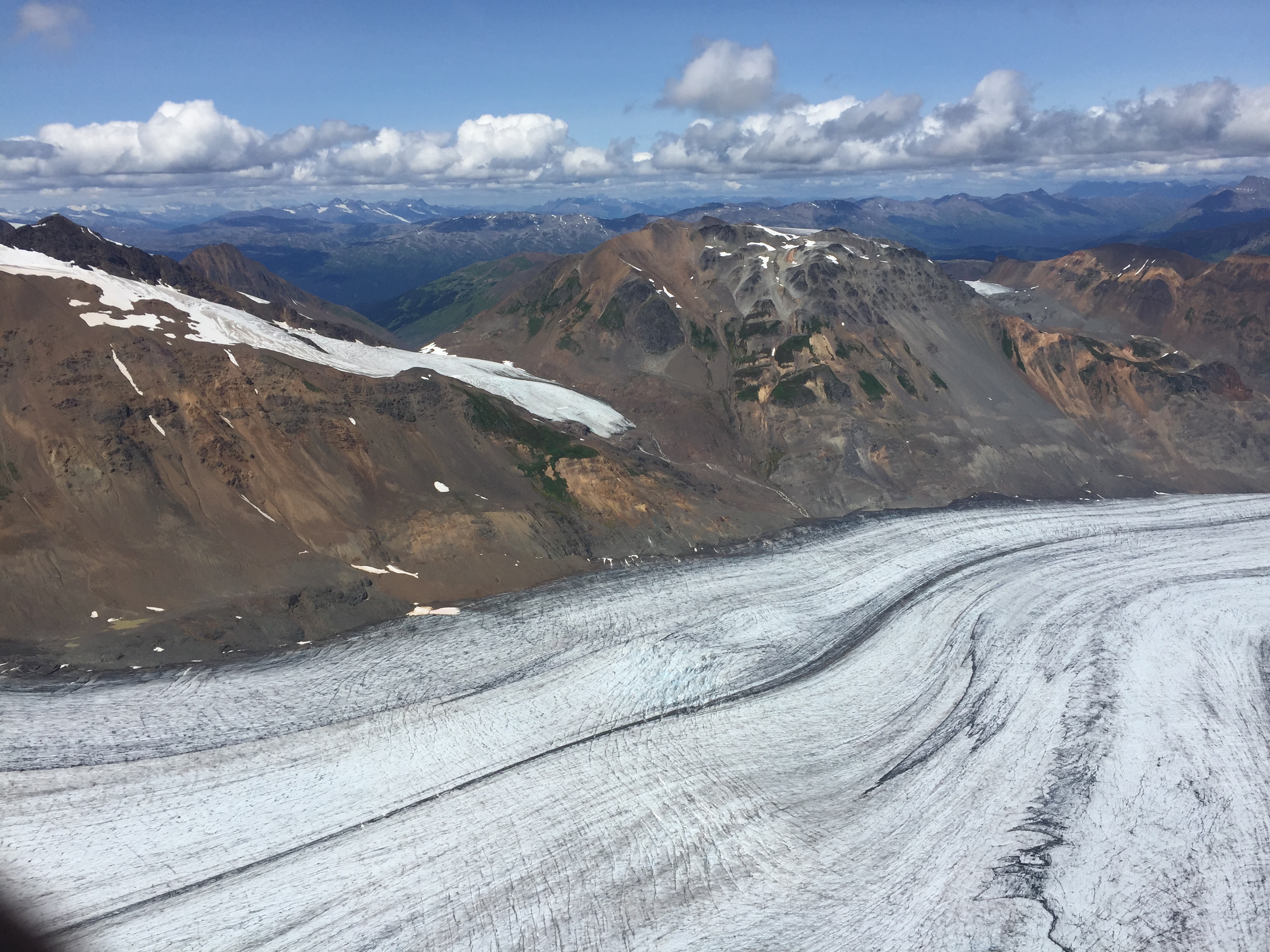 Looking north down the Treaty Glacier on the Treaty Creek property – from left to right: the SW, AW, NW, Konkin, Copper Belle, GR2/HC, RR and Goldstorm zones are located in series along this mountain range. The Kyba Discovery Line and Sulphurets Thrust Fault also run down this range which is likely why there are so many mineralized zones.  Seabridge’s proposed tunnels required for KSM production are proposed to run down this same range.

In addition to the “string of pearls” description, the other thing that Konkin stresses is the significance of the Treaty Creek property being on the “right side of the mountain range”.  Seabridge’s KSM is an absolute world class project but due (in part) to tough logistics has a very high CAPEX ($5B) which includes over 20 km of proposed twin tunnels to connect with their proposed processing plant and tailings pond located on the other side of the Treaty Creek property.

Treaty’s Goldstorm is geologically similar to KSM’s Iron Cap and is located only 5 km away.  Konkin pointed out that both the Iron Cap and Goldstorm are located in the same layer or at similar depth but that much of the Iron Cap is situated beneath hundreds of meters of ice and rock. Contrast that with the Goldstorm which has one corner exposed right at surface with the rest of the deposit appearing to lie just beneath the surface.  Two similar deposits - but one requiring underground mining and major twin access tunnels (Iron Cap) and the other potentially an open pit (much cheaper to mine) with relatively easy access to the highway (Goldstorm).

The fact that it’s a mere 20 km down the valley from Treaty to the power line and highway that leads to the shipping ports in Stewart can’t be overstated.  Logistics can be a project breaker, or in Treaty’s case a project maker. The Goldstorm is “on the right side of the mountain”.

The twin tunnels required for Seabridge’s KSM to go into production are proposed to run directly through the most geologically significant and mineralized zones of Treaty Creek for about 12 km, including through the Goldstorm zone.  Seabridge will need to cooperate with the Treaty Creek project operators with respect to their proposed tunnel system.

At the start of this report, I mentioned that I wanted to soak up what I could from Konkin.  His depth of knowledge is only equaled by his enthusiasm towards Treaty Creek and I’ll be the first to admit that his output is greater than my input.  Having said that, I have come to the undeniable fact that he’s the right geologist for this project.  I say this for two specific reasons: first, his brain works differently and he looks at things from a different perspective than most geologists do - which enabled him to develop Pretium’s incredible Brucejack deposit (located south of Treaty Creek) and recently take it to production, and secondly, his decades of experience and intimate knowledge of the entire SHS which is being applied with great success at Treaty Creek.  Nobody else has that.  He clearly has what it takes to deliver the goods. 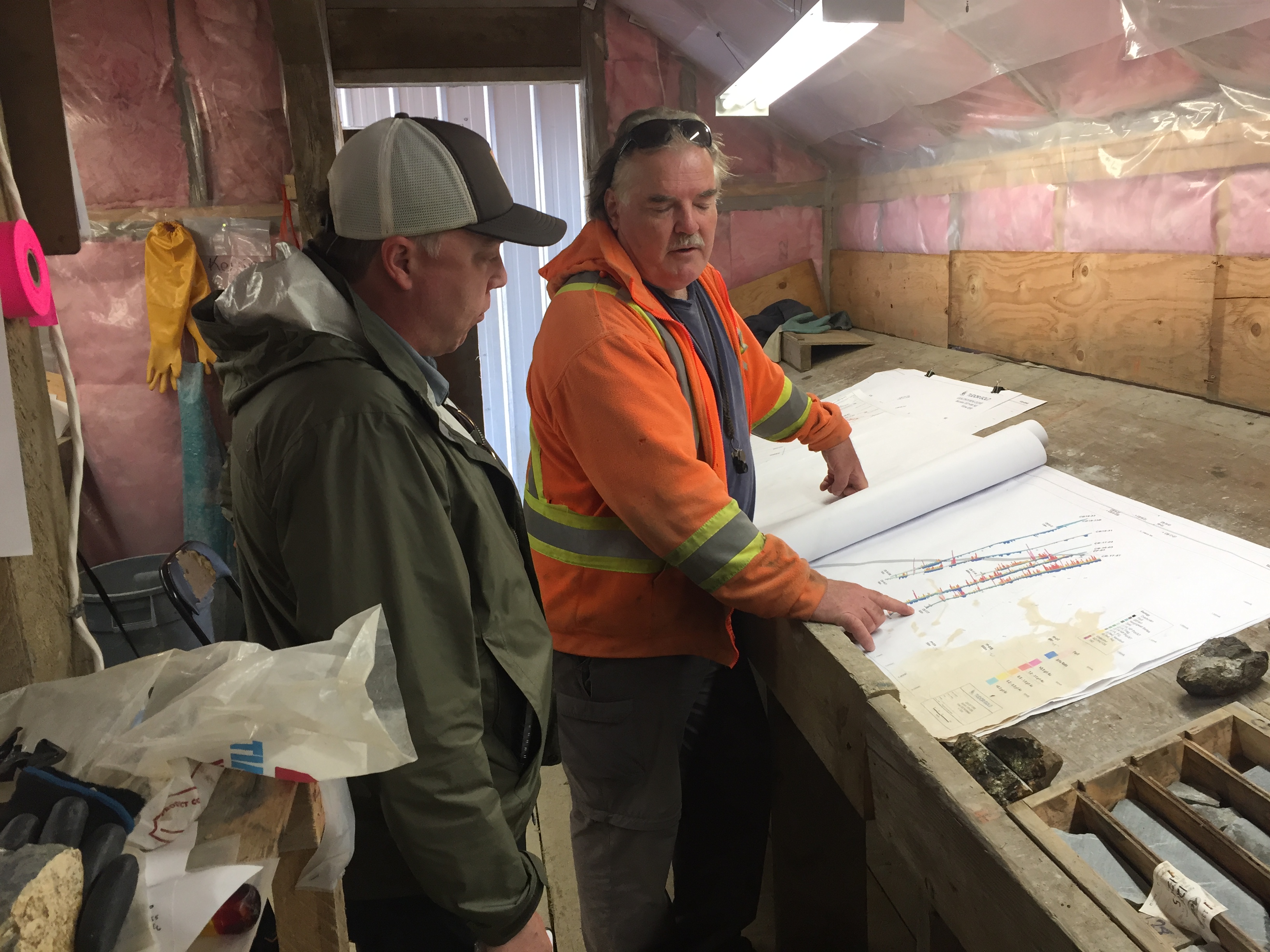 Ken Konkin and Bill Shaw of Stansberry Research in the core shack.  Apparently, Ken knows his stuff so well he can run the program with his eyes closed. ?

Given that Seabridge’s KSM already hosts the largest undeveloped gold deposit in the world by reserves, and the adjoining Treaty Creek property potential is now beginning to be understood and unlocked, the statement above may end up being the understatement of the century.  With the “pearls” on Treaty Creek showing incredible potential, combined with the excellent Treaty Creek project logistics, I can understand why billionaire Eric Sprott (who recently invested heavily in all three Treaty Creek JV partners) recently stated:

They are “drilling a monster play”.

“It’s in the perfect logistical place to develop it”.

“So that’s the sort of play that I like where man, if the price of gold goes to $1,700 or $2,000 these plays will look so economically viable and the stock will go up so much, and the analogy I use is Seabridge back in 2000.  I remember buying it at a dollar…and Seabridge went from $1 to $35 dollars!  That is what we are looking for – a dollar to $35 dollars, set you up for life!”

I will try and get this out in the very near future but things are just a tad crazy right now with the market finally beginning to understand the potential of this project. The phone calls and emails just won’t quit. Exciting stuff!